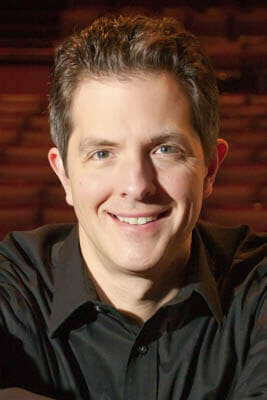 I serve as director of campus music activities and lead the Merrimack Schola, the liturgical music ensemble of campus ministry. I enjoy a varied musical career as a pianist, choral director, liturgical musician and arranger. As a concert pianist, I have performed across the United States and in many foreign countries, including Japan, Australia, Russia and throughout the Middle East. I performed the premiere of Bernard Rands’s “Triple Concerto” with the Florida Philharmonic, and performed and recorded the work with the Cleveland Chamber Symphony, released on Albany Records. I also recorded Donald Martino’s “12 Preludes for Solo Piano,” released on New World Records. My many other recordings of contemporary and chamber music can be found on the Naxos, Etcetera, CRI, Newport Classics and MMC labels. I have been a member of the pioneering contemporary music group Core Ensemble since its founding. Core Ensemble has received national recognition for its unique programs, dubbed “chamber music theatre,” that focus on themes of diversity, multiculturalism and social justice. I have served as music director, vocal coach and dramaturg on Core Ensemble productions, arranging many jazz and popular pieces. I also composed original music, including the incidental music for Kirsten Greenidge’s play “Hinges Keep a City,” produced by the Huntington Theatre Company at the Calderwood Pavilion in Boston. I am a member of the National Association of Pastoral Musicians and the American Choral Directors Association.