A business graduate of the class of 1962, Girard began his career at Merrimack College as a part-time student. An industrial photographer by day, he attended classes three evenings a week. Working towards his enrollment as a full-time student, Girard continued his photography career and made Dean’s list his first semester at Merrimack. Girard went on to become President of his fraternity (SBK), editor of the school newspaper and vice president of the student government. At commencement, he received the loyalty award for his hard work and dedication to Merrimack. 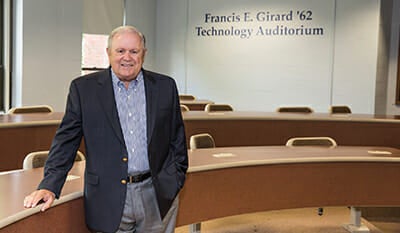 Upon graduation, Girard served in the army and later held top positions at Boston Technology, Inc. (1989-1998), NEC Information Systems (1985-1989), Wang Key Data (1983-1985). In January 1998, Girard became Chief Executive Officer of Comverse Network Systems and in 2001 became Vice Chairman of the company. Girard was a member of the International Engineering Consortium and held the position of Director of the Massachusetts Telecommunications Council.

Throughout his career, Girard remained involved at Merrimack. His commitment to the College and School of Business was praised by leadership, and in 1999 the business school was named in his honor in recognition of his transformational gift to Merrimack. Girard’s wish was that, by his example, others would be inspired to increase their support to the College as well. His gift established the Francis E. Girard School of Business and supported several key initiatives for the College.

Girard’s service to Merrimack College spans greater than his philanthropic support as former Chairman of our Board of Trustees, President’s Advisory Council and member of the College Leadership Council. Girard was bestowed an Honorary Doctorate of Business Administration in 2016 from the College for both his business leadership and philanthropy. He was generous with his time, was a strong advocate for education and a loyal partner to his alma mater.

In September 2019, Girard died peacefully with his beloved wife, Henriette McNiff Girard, and family by his side. “Those who knew him will always remember him as a builder, a visionary and a leader who had a tremendous impact on this College, its students, faculty and staff. He will always be remembered as a Warrior,” said President Christopher E. Hopey, Ph.D.

Henriette, an active member of the Merrimack community and a member of the College Leadership Council, continues the work Frank started at Merrimack and the commitment to its students, faculty and staff. Frank’s grandson, Christopher Girard, graduated from Merrimack in 2017 joining the alumni family and continuing Frank’s legacy at the College.