A Merrimack Leader From The Start

“I am an advocate and supporter of the school as a way to give thanks for what it has given me.” 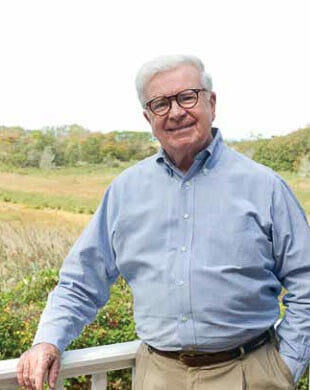 If any man embodies the proverb, “Charity begins at home,” it is Bob McCusker ’68. From the year he graduated from Merrimack—the school that “always makes me feel at home”—through the present, Bob has consistently given back to the college that helped launch his successful career.

Business Savvy from the Start
Bob majored in business, with a specialty in finance. From the start, Bob was active in school government, moving up the ranks from class treasurer to vice-president and president during his senior year. He was the president of the Business Club, on the yearbook staff, and a Phi Kappa Theta fraternity brother. “My friends used to tease me that I was always in meetings,” explains Bob of his busy extracurricular life on campus.

After graduation, Bob took a job at Gillette, the company he worked for in the summers preceding his junior and senior years. Right away, he took part in an 18-month financial management development program where he gained valuable exposure to different business functions from finance to manufacturing. Over the next thirty years, Bob held various financial positions at Gillette, worked in sales and marketing, and spent the last 17 years living overseas, working in general management. His roles took him to Australia, Thailand, China, Pakistan, India, and Poland. In his last position as an Area Vice President based in London, Bob was responsible for the oral-care business in Africa, the Middle East, Eastern Europe, the former Soviet Union, and the Indian subcontinent. Bob describes himself as, “the guy who went in to set up new businesses in developing countries.”

True to the Gold, White, and Navy Blue
Fortunately for Merrimack, Bob’s energy isn’t contained to the business world. He participated in Merrimack ‘s Alumni Council from 1968 until he relocated to Australia in 1981, the last couple years of his tenure as council president. In recognition of his commitment and contribution to the college, he was honored with the Alumnus of the Year Award in 1978.
Upon his return from his expatriate posts, Bob served on the Merrimack Board of Trustees from 2004 until 2010. Currently, Bob funds the Merrimack College Speaker Series, bringing luminaries in the fields of leadership, education, creativity, publishing, and business to campus to share their inspirational stories.

While there are many worthy options for Bob’s time and resources, he chooses Merrimack because of the school’s value to society and his belief that his investments net very powerful returns. Bob explains his philanthropic focus: “I have huge respect for the school’s Augustinian traditions that bind me to this community.” Specifically, he values the school’s longstanding support for first-generation college students as well as students of different ethnic backgrounds. He also admires the tradition of volunteerism, and has been impressed by students’ recent community service initiatives. Recognizing that tuition does not sufficiently cover total student expenses, and acknowledging the need to strengthen the school’s endowment, Bob gives generously of his money, as well as his time.

Aspirations for his Alma Mater
Expressing his profound admiration for Merrimack, Bob explained his hope for the school: more academic programs, greater national recognition of the school’s academic excellence, and more alumni engagement. Having recently attended Merrimack ‘s Distinction in Action block party, Bob experienced firsthand the energy and excitement that permeates the campus. Noting the school’s many physical changes and improvements, Bob encouraged fellow alumni to return to North Andover to see what’s changed and to get involved. “It is our responsibility as graduates to give back and help current students, just as our predecessors gave back to help us.”