A Revitalized Center Of Spirituality at Merrimack

As the newly renovated spiritual cradle of Merrimack College, the Collegiate Church of Christ the Teacher will host transcendent events for all, says Father Raymond Dlugos, O.S.A, vice president of mission and ministry. 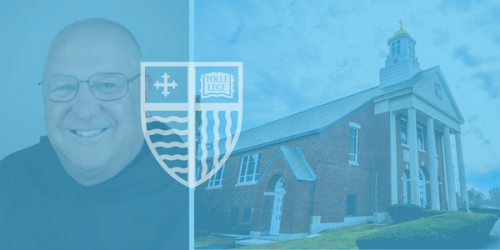 Father Raymond Dlugos, O.S.A., has officiated many weddings of Merrimack College alumni at the Collegiate Church of Christ the Teacher. But when it comes to the awesome power of love, community, and spirituality, one wedding, in particular, stands out.

A Merrimack alumna’s wedding was set for the weekend after the horrific gas explosion that rocked the Merrimack Valley in 2018. On the day of the wedding, the power was still out in the area and the weather was particularly dreary. Battery-powered LED lights from the wedding photographer were used to illuminate the ceremony.

“And just as the ceremony was ending, the power returned, the sun came out and everyone cheered,” Dlugos said with a smile.

When the doors to the newly renovated church open to the public next month, it will resume that vital role as the spiritual cradle of the Merrimack community, but with a twist as a gathering space for impactful and thought-provoking programs and events.

“Masses such as Baccalaureate and Mass of the Holy Spirit will continue at the church as well as weddings,” said Dlugos. “But it was clear when renovation talks began that what the campus needed was not a 1,000-seat church. It needs a space where people could gather, that could also be a church.”

To realize that goal, seating and the altar will be moveable, allowing for a variety of setups depending on the event.

“The church will always be the center of spirituality for this area,” Dlugos explained. “And the events we will hold will be transcendent and important events of gratitude, from musical performances to lectures to services of worship.”

The major renovation work not only includes the church, but also the addition of a new student union on the bottom floor, complete with a bowling alley, e-sports space, and a new dining option in Monica’s Kitchen.

When he first arrived to work at Merrimack in 2008, Dlugos said there was much beauty in the church, from the stained-glass windows to the woodwork of the ceiling to the overwhelming sense of community during services.

“When we had Mass of the Holy Spirit or Baccalaureate, there was just this energy,” Dlugos said. “It was fun. There was nothing quite like seeing standing-room only and folks even having to stand outside because the crowd was just so large.”

Dlugos began the tradition of giving out some type of physical representation of the overall message of those services, whether it was “Here I am, Send Me” headbands, or rocks to signify the Feast of Pentecost. This is a tradition that Dlugos said he hopes to get back to once the church reopens.

Among the numerous changes and updates to the church, Dlugos said the most important is better accessibility, including adjustments to the main entrance of the church and the addition of an ADA-compliant elevator.