Campus News › A Rose by any Other Name…Still Shatters When Frozen in Liquid Nitrogen
Quick Links
Previous Article Merrimack’s Marching Orders: Strike Up a Band December 18
Next Article Women’s Ice Hockey Team Traveled to Ireland as Ambassadors of their Sport and as Scholars January 9

Instead of writing a paper on how the Greek tragedy about the brothers Epimetheus and Prometheus would have changed if the characters switched places, Arlene DiMento's students and other sixth graders at the Alex B. Bruce School got a visit from Merrimack College undergraduates on a recent Friday afternoon. 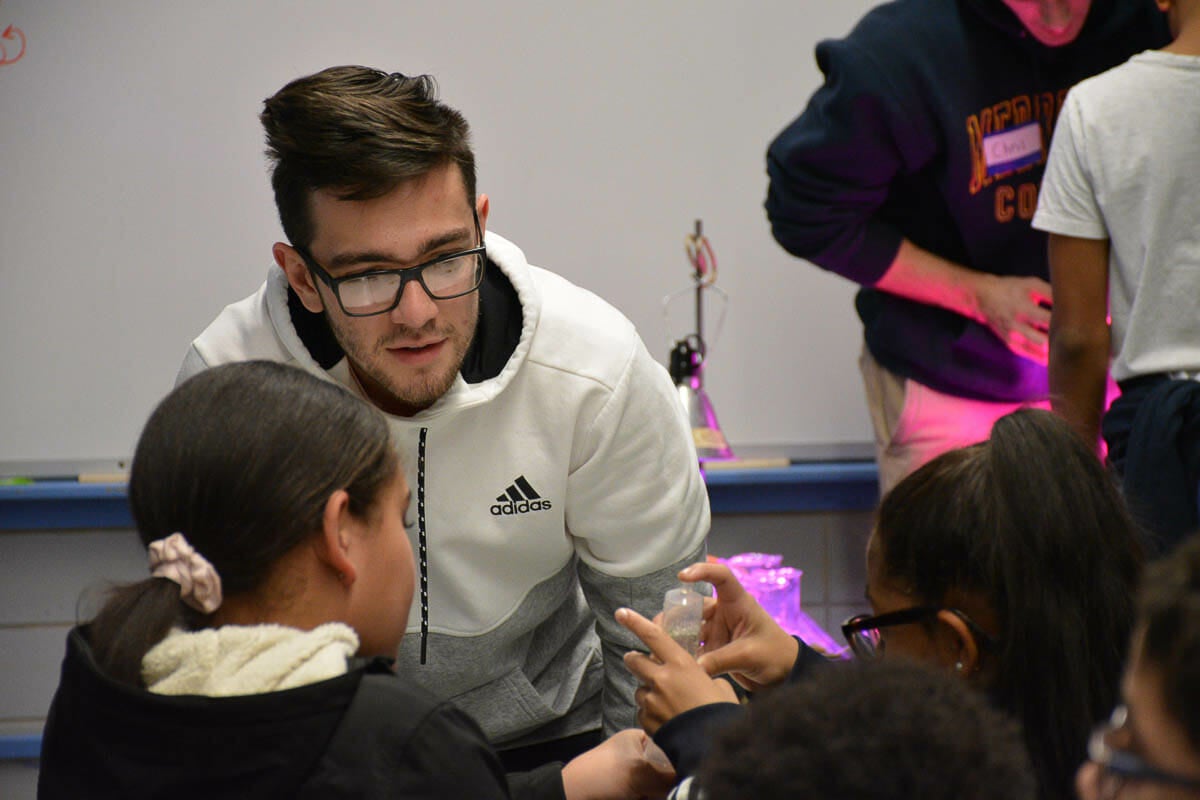 Assistant professor of chemistry Mark McCoy and about 15 of his students visited the school in Lawrence, Massachusetts to perform scientific experiments that demonstrate concepts and academically motivate younger scholars.

McCoy’s students performed experiments featuring homemade lava lamps, sinking Coke cans, bubbling spinach and magnets versus baby oil and black iron. The elementary school students rotated between four classrooms so they all got to see each experiment. Students wrote each of the experiments, McCoy said.

“This is the first time I’ve dealt with kids in a long, long time,” said biology major William Buraczynski ’21, of Littleton, Massachusetts. “They are a nice bunch of kids. They are definitely a lot more engaged than I thought they would be.”

“I think it’s a good opportunity for me to apply what we learn in class and teach it to the kids,” said Lisa Nguyen Hoang ’20, a biology major from Peabody, Massachusetts. “I’m having a lot of fun. They’re a handful but very cute.”

Visits such as the one from McCoy’s class help young students tremendously, said DiMento, an English language arts teacher at Bruce. The experiments were creative, unique and understandable to the elementary students, she said.

“The more hands-on experiences the children have, the more they can visualize what they are learning and understand the world around them,” DiMento said. “I think it’s fabulous.”

McCoy performed a chemistry magic show before the breakout sessions that included a demonstration of liquid nitrogen with a boiling point of minus-320.4 degrees Fahrenheit freezing a rose. “The rose is so cold that it broke, it shattered,” McCoy said after dropping it on the floor amid the din of cheering students.

The visit was coordinated between the Bruce and the Stevens Service Learning Center.