Allan Weatherwax, Ph.D., has been named dean of Merrimack College's School of Science and Engineering and professor of physics. 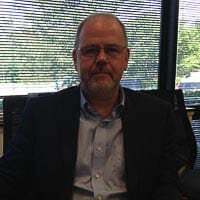 Weatherwax will assume his duties at Merrimack on July 7

“I like this type of mission-based institution, “ said Weatherwax.

As professor of physics and dean of the School of Science at Siena College, he maintained an active research agenda that included space plasmas, geophysics and the aurora. He has conducted geophysical research in the Antarctic and Arctic for decades, and remains a member of the Polar Research Board of the National Academy of Sciences.

The Weatherwax Glacier in the Antarctic stands as testament to his contributions to the field.

In announcing the appointment, Provost Carol Glod called it “a significant step for Merrimack and one that will accelerate the great strides made by the school.”

Mary Noonan, who has served as dean of the school for four years, will return to the computer science faculty.

Glod praised Noonan for her “extraordinary work” as dean, noting that she “oversaw the explosive growth of the school’s health sciences offerings and graduate programs.”

Weatherwax said he was ready for a career change and Merrimack’s faculty and administration are a good fit with him.

“There was an energy, and an opportunity with my background, to help direct and guide that energy to do even more,” he said.

He’s got extensive grant experience with NSF and NASA so he wants to use his contacts to beef up Merrimack’s work with them.

Weatherwax has worked with MIT’s Haystack Observatory in Westford researching models for predicting weather extremes and would like to harness his contacts to create research opportunities for Merrimack students.

Weatherwax would like to see more programs for students during summer months similar to Siena which has an active summer undergraduate research program. Students live on the campus and work with faculty but there are also academic summer camps for younger students such as computer sciences, LEGO Robotics, and astronomy.

“It would be nice to develop a summer culture of academics where the college doesn’t shut down,” he said. “I look forward to working with the other deans on interschool initiatives.”

Weatherwax has been at Siena for 14 years. Before that he worked as a research faculty member at the University of Maryland at College Park for about six years. During the same time he worked as a visiting professor for Washington College on the Maryland Shore.