Students traditionally go home during winter break, to feast on home cooking and recharge their batteries among family and friends  — but there are many who recharge by volunteering to help the needy. 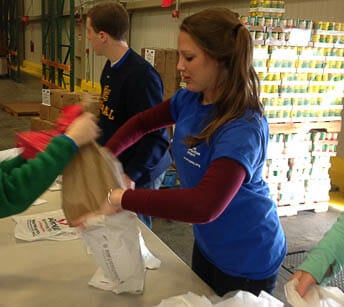 Merrimack’s Campus Ministry office organized community-engagement trips for students and faculty to Washington, D.C. and Jamaica, from Jan. 3 to 10, and another to travel to Camden, N.J., from Jan. 10 to 17.

The goal is more than a token effort of physical labor over the course of a week, said Campus Minister Jeffrey M. Wallace.

“A large reason we do the experience is community service, but a large part of it is to expose them to a different reality than their own,” Wallace said.

The alternative winter break is designed to expose students to poverty, injustice and their responsibility to other people.

A central tenet of all of the alternative winter break service experiences is reflection. Students reflect on the service they do every day though journaling, small group discussions, and other activities that highlight different aspects of Catholic social teaching. Campus ministry hopes that reflecting about their experiences will help students recognize that poverty and injustice exist in the world and empower them to work toward a more just society.

The program takes students outside of their daily lives — and the campus neighborhood — as to show them there are people across the country and the world who are disadvantaged and need help.

Hopefully, it leads to a lifetime of service using the skills and lessons learned at Merrimack.

About 30 students and six faculty or staff volunteers took on the trips. The trips were open to the entire Merrimack community, whether or not they are involved in Campus Ministry.

Volunteers shared their skills and talents but more important, they shared their time with the disadvantaged, Wallace said.

About 11 students and two faculty advisors traveled to Camden with an overnight stop at St. Augustine Parish in Philadelphia with the Rev. Bill Waters, O.S.A.

Students in Camden worked with Romero Center Ministries, named after Oscar Romero, archbishop of San Salvador, who spoke out for social justice and against poverty. He was murdered while offering Mass in 1980.

“What (Romero Center) is trying to do is show students where Camden is today,” Wallace said. “It’s positive because it allows students to see a reality other than theirs.”

Students performing service work in their immersion experience can see that residents in Camden haven’t given up hope and still work toward a better life, he said.

As part of the experience, students will take part in a snap challenge in which they break into groups of four to buy two meals using the value of a $12 food stamp. It was hoped the students would see how difficult it is to survive on that kind of budget day after day.

This was the first year Merrimack students traveled to Kingston, Jamaica for the alternative winter break.

They volunteered with Mustard Seed Communities, which takes in abandoned children who are physically or mentally challenged, or who suffer from disease such as AIDS.

“I can’t imagine what a student might be feeling when they see a child abandoned because they can’t move or they have AIDS,” Wallace said.

The children need the time and affection from Merrimack’s students more than physical labor, he said.

“By engaging them with the international community they will experience a number of things, different cultures; and that will open their eyes,” Wallace said

About nine students and two faculty or staff volunteers went to Washington where they worked with Youth Services Opportunity Program to help citywide organizations.

“The focus is on the homeless,” Wallace said.

Among their tasks was working at a soup kitchen; providing recreational activities and companionship to young formerly homeless children; distributing food and supplies at food pantries; and socializing with people who are homeless, while bringing food to drop-in centers.

Campus Ministry also runs an alternative spring break. Volunteers will work in six placements spread over five states in March, including placements in the Bronx; Salem, W.Va.; and New Orleans.

Additionally, campus ministry and Athletic Training and Civil Engineering Department working in collaboration are scheduled to send students to Haiti in May.

Finally, students are scheduled to visit Guayaquil, Ecuador to live and learn about that country and the situations in which its people live in June.