Members of Merrimack College's National Society of Black Engineers chapter are attending the group's national convention in Detroit, networking with peers and talking to recruiters from top companies. 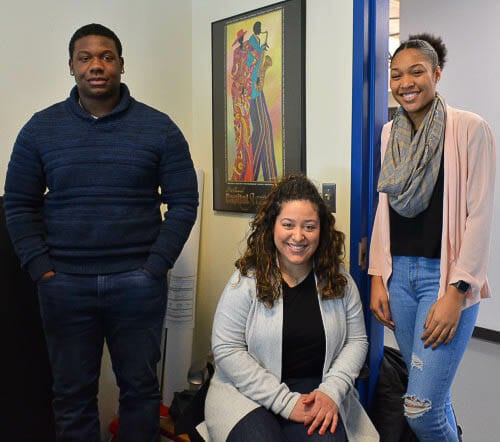 “You get national exposure from the conference,” said mechanical engineering assistant professor Rickey Caldwell, the chapter’s adviser. “The exposure is unlimited.”

“When I go to regional or national conventions, they have international and national companies,” said Derrick Harris ’21 of Baltimore, vice president of the chapter. “For instance, Apple and General Motors.”

Harris, who majors in electrical engineering, landed an internship at the aerospace contractor Harris Corp. in Rochester, N.Y. after attending a conference, he said. It was only one of multiple offers Harris received from blue-chip corporations.

Daniela Rivera ’20, a biology major from Roselle, N.J. who is the chapter secretary, and President Brianna Raphino ’20, a mechanical engineering major from Randolph, Mass., are attending the 45th annual national conference, which drew more than 13,000 people last year.

“I feel I’m growing professionally and hearing from others what it is to be a professional,” Raphino said.

Merrimack’s NSBE chapter is open to any student who supports the society’s mission regardless of race or academic major, said Caldwell. The national group’s mission is to “increase the number of culturally responsible black engineers who excel academically, succeed professionally and positively impact the community,” according to its website.

“Any major can join, but the hyper-focus is engineering and STEM,” Caldwell said.

There are many benefits to membership, he said. The society helps build a sense of community among people who aspire to the profession and that is a key to success because it’s an opportunity to discuss current issues related to the field, Caldwell said.