Augustinian Friar Bill Atkinson is worthy of consideration for sainthood after a life of heroic virtue, bearing his personal crosses with dignity and patience after being left a quadriplegic in 1965, said the Rev. Ray Dlugos, O.S.A., vice president for mission and student affairs at Merrimack College. 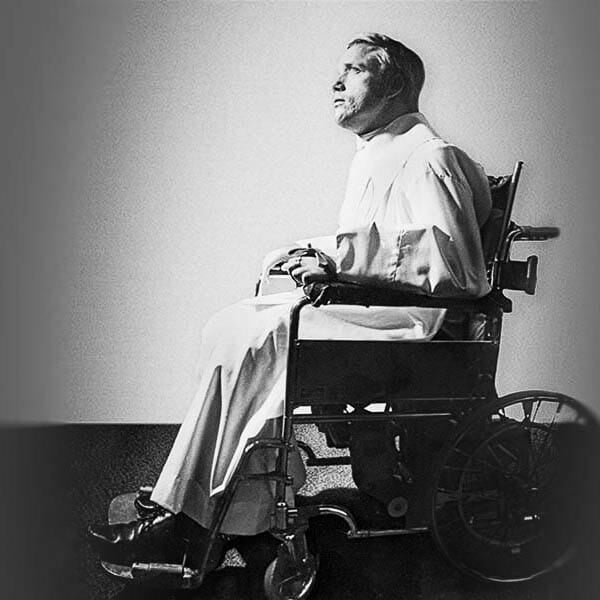 Fr. Bill’s most significant and essential sign of holiness was his sense of gratitude, said Fr. Ray, who admires the way Fr. Bill was able to maintain his sense of gratitude for life and its pleasures after the toboggan accident left him paralyzed while he was studying at Good Counsel Novitiate in New Hamburg, N.Y.

Fr. Ray was a long-time acquaintance of Fr. Bill, the world’s first quadriplegic priest, whose case for canonization is being championed by the Order of St. Augustine, which founded Merrimack College.

The Philadelphia Archdiocese declared his case “worthy of promulgation of the Cause of Canonization,” and Fr. Bill was declared a “Servant of God,” the order announced in early February.

The declaration as a servant of God is the first of four steps to being named a saint. It indicates a person’s life and works are being investigated by the church’s Congregation for the Causes of Saints for worthiness to be declared a saint. The next step would be declaration as venerable with a decree of heroism; then if a miracle were attributed, beatification with the title of blessed; and finally, if a second miracle is attributed to a person, then declaration as a saint would follow.

As hard as life may have seemed for Fr. Bill, it was obvious that he considered every breath he took a blessing and every moment of life a gift, Fr. Ray said.

“What he exuded more than anything else, and what came across was gratitude,” said Fr. Ray.

Not only did Fr. Bill go on to be ordained after the horrific accident, but he taught high school theology in Pennsylvania for nearly 30 years and was forever a pleasant companion, “who was profoundly aware of the presence of God in himself and in everyone around him,” said Fr. Ray. Even though Fr. Bill was dependent on others for even the simplest of life’s tasks, he never complained and was always able to see the positive in an experience or another person.

Fr. Ray was a high school senior exploring his vocation to the priesthood when he visited Villanova on a recruiting visit in 1974 and met Fr. Bill, who was preparing for ordination nine years after his accident. He was invited to attend Fr. Bill’s ordination in February 1974 then attended the new priest’s first Mass — “which was very powerful,” Fr. Ray said.

Thanks to Fr. Bill, Fr. Ray had a front row seat for Mass when Pope Saint John Paul II visited the United States in October 1979. That’s when Fr. Ray learned the Secret Service is very protective of the pope.

Saint John Paul II held a private Mass for priests, nuns and seminarians at the Philadelphia Convention Center so Fr. Ray drove from Washington Theological Union ,where he was attending classes.

He and the Rev. Don Reilly, OSA, entered the convention center and saw Fr. Bill up front, so they walked over to say hello. Fr. Don took an aisle seat next to Fr. Bill, and Fr. Ray took a seat on the other side during the chat.

A Secret Service agent eventually told Fr Don to move, but Fr. Ray stayed throughout the Mass. As the pope descended the altar, Cardinal John Krol pointed out Fr. Bill, whom he’d ordained, to the pope, who walked over and leaned down to give Fr. Bill a hug.

As he did, Fr. Ray reached over to touch the pontiff. Bad idea. A Secret Service agent swiftly intervened.

Fr. Bill was still at the Augustinian-led Villanova University, waiting to start his teaching assignment at his alma mater, Monsignor Bonner High School in Drexel Hill, Penn. when Fr. Ray entered the order as a seminarian in 1975. Occasionally they would talk or dine together as they struck up a friendship.

“He was not a hard guy to get to know,” Fr. Ray said. “He was a very friendly guy, very approachable.”

Fr. Bill liked to sit in a sunny common room in the friary where he would watch television, read, or talk with fellow friars.

Fr. Ray was the province’s vocation director from 1990-1994 and often visited his Monsignor Bonner High School, where Fr. Bill taught.

Fr. Bill was 60 when he died from complications associated with an infection in 2006.

Fr. Ray said he believes Fr. Bill’s case is worthy of promulgation. Because his mobility was so limited, Fr. Bill was keenly conscious of what God and others did for him. Time and again the theme of gratitude of life comes up when Fr. Ray recalls his fellow friar.

Said Fr. Ray: “Bill exemplified the virtues of a saint.”