Brother Aldo Potencio, OSA, had become a welcome site walking around Merrimack College's campus during the past year but he has seldom stayed in one place for long during the past 20 years and is on the move again, returning to Chicago to continue his studies at Catholic Theological Union with the hope of being ordained a priest within the next couple of years. 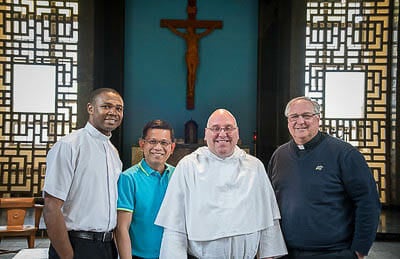 Brother Aldo spent the 2015-2016 academic year at Merrimack discerning his own vocation while working in the Grace J. Palmisano Center for Campus Ministry, helping students grow in the their spirituality.

“Especially since being here, I would say I would like to do my ministry with young adults, with younger adults who are growing in their spirituality and finding their place in the bigger Church,” Brother Aldo said before leaving for vacation to his native Philippines.

He met and developed closer relationships with students through the Bible study group Renew, the new student-initiated faith-sharing group Tru-Life, and Alternative Spring Break to Sulphur Springs, W.Va. where he worked alongside students for Habitat for Humanity. He also worked closely with Alisha Reppucci at Hands to Help, with professor Joseph Kelley at the Center for the Study of Jewish-Christian-Muslim Relations, and with the Rev. Ray Dlugos on First Year Experience.

He went to a high school run by the Augustinian Sisters of Our Lady of Consolation then immigrated to the United States from the Philippines about 21 years ago with an undergraduate degree from the University of Santo Tomas. He went to work as a physical therapist, first in Sebring, Fla., then Brooklyn before moving to Long Island, N.Y.

Brother Aldo next earned an MBA in accounting from the State University of New York at Buffalo and after graduating in 2006 went to work for Ernst & Young in New York City. After four years he took a job with The Goldman Sachs Group in New Jersey but the tug of the religious life called him in a new direction. He likened the insistent calling he felt to a quote from St. Augustine, “Our hearts are restless until they rest in You.”

After a year in pre-novitiate in Ardmore, Penn., Brother Aldo was accepted as a novice in August 2012 and a year later took his simple vows.

Brother Aldo went to Chicago where he started his theological studies in 2013. After his second year of studies he arrived at Merrimack College for the customary Pastoral Year to experience ministry in preparation for solemn vows.

Augustinians work as parish priests, as administrators, teachers, professors, and missionaries so Brother Aldo was assigned to Merrimack to explore his interest in campus ministry.

After his vacation in the Philippines, Brother Aldo will attend a 51/2-week Spanish immersion program in the Dominican Republic in June then continue his theological studies.