Merrimack College Campus Ministry broke with Thanksgiving tradition this year when it asked for financial donations in lieu of food for this year's holiday dinner drive. The idea paid off as the community raised over  $7,000 in donations to feed the food-insecure in Lawrence, Massachusetts. 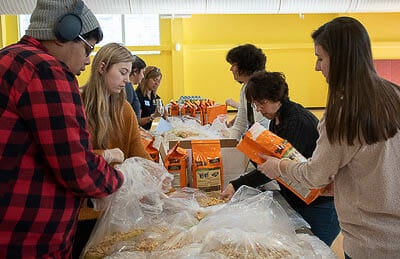 With the help of Sodexo and its General Manager Bob Wilkey, the food drive maximized its buying power to purchase food in bulk, giving the campus the opportunity to donate as many as 120 complete meals and another 40 near-complete meals to Neighbors in Need, a non-profit in Lawrence.

That’s 70 more meals than the Merrimack community donated a year ago, including 30 more complete meals.

The meals were delivered to Neighbors in Need Tuesday, Nov. 6, 2019. Neighbors then immediately distributed them to those who otherwise wouldn’t have a Thanksgiving meal in Methuen and South Lawrence. Additionally, money left over will be donated to the non-profit to buy food after the holiday.

“Overall, it was great,” Fr. Ray said. “A lot more people participated in the campus community because we tried asking for financial donations.”

About 40 volunteers signed up to work along an assembly line putting baskets together in the Sakowich Campus Center’s MPR Monday Nov. 25, 2019. The baskets included a 12- to 14-pound turkey, gravy, cranberry sauce, stuffing, vegetables, potatoes, beans, dinner rolls and an apple pie.

Lindsey Baillie ’19, a health science major from Pembroke, Massachusetts who is graduating at the end of the semester, was on the food line Monday.

“It’s exciting to see everything the community has given and be able to feed people a Thanksgiving dinner,” Baillie said.

Edison Chalas ’20, a political science major from Lynn, Massachusetts, is troubled by the number of people that are food insecure and wanted to make sure he did something to help them by volunteering on the food line.

“I think it’s a really good way to help those in need,” he said.