The student-run Campus Kitchen at Merrimack held its ribbon cutting ceremony Friday Sept. 18 and is already being called a welcome contributor in the fight to feed Merrimack Valley's hungry. 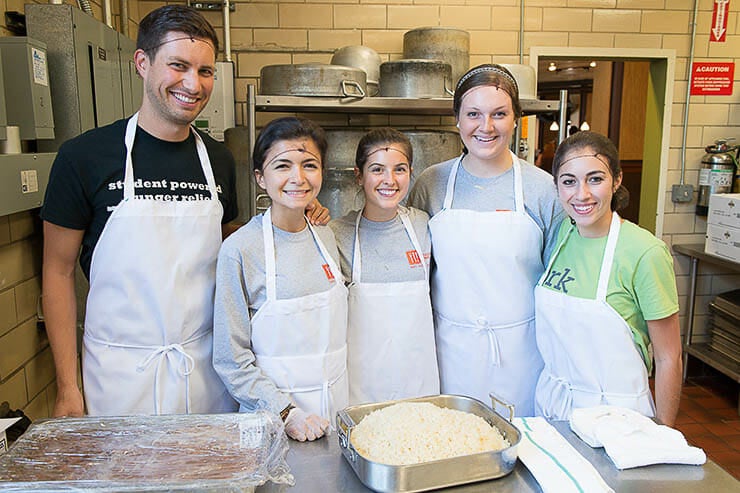 The program is using recaptured food that has been prepared but not served from Sparky’s Place in conjunction with other donations to prepare meals for Lazarus House in Lawrence.

“It’s really nice to be able to use what we have to give to people,” said co-founder Lauren McCarthy ’16.

It took more than a year of planning for McCarthy and co-founder Amy Byrne ’16 to put all the parts in place to start the program. “I can’t tell you how excited I am this day has come,” said the Rev. Ray Dlugos, O.S.A.

Campus Kitchen at Merrimack will be a great asset to Merrimack Valley’s underprivileged population, said Ken Campbell, the food coordinator for Lazarus House.

“Actually, it’s very significant because we serve so many people in the course of every day and every week so when we can get support, especially from younger people, students, it motivates us,” Campbell said. “It allows us to schedule meals and food delivery so we don’t have any letdowns.”

Campus Kitchens Project is a national organization empowering student volunteers at colleges and universities across the country to fight hunger and food waste in their communities. Merrimack is the 46th school to join the fight, Matt Schnarr, the expansion and partnerships manager for Campus Kitchen Project’s Washington, D.C. headquarters, said during opening ceremonies.

Campus Kitchens Project formed in 2001with the underlying goal of helping students create programs to raise awareness of the hunger issue.

Nationally, Campus Kitchen Project sites have recovered 4 million pounds of food to serve 2 million people. In the last calendar year over 20,000 student volunteers have performed 75,000 hours of community service and recovered over 900,000 pounds of food while serving almost 200 agencies and 15,000 people, Schnarr said.

Raising awareness to the issue of hunger in the Merrimack Valley is a key part of Campus Kitchen contribution to Lazarus House, Campbell said.

The seed of the Merrimack idea came from a meeting of the National Conference for College Women Student Leaders that McCarthy attended in the summer of 2014. During the conference she and other attendees were urged to think of ways to help America. McCarthy came up with the Campus Kitchen idea and teamed with Byrne for planning. They raised seed money for the Campus Kitchen at Merrimack through a grant from Sodexo Foundation which is a sponsor for the national project.

Sparky’s Place agreed to donate unused foods and let the students use kitchen facilities to prepare the meals. Whole Foods of Andover and the Community Supported Agriculture program at Farmer Dave’s in Dracut also agreed to donate food.

The first meal preparation with beef, rice and vegetables started after the ribbon cutting Friday.

Normally, the meals will be prepared on Sundays.

Casey Ouillette ’18, donned a hairnet Friday to help prepare meals. She was one of the first volunteers in the planning process. “It’s was so long ago, I’m excited to see it finally happening,” Ouillette said.