Campus News › Cole to Grads: Embrace Change, Don’t Be Changed
Quick Links
Previous Article Master’s Graduates Urged to Never Give Up May 20
Next Article Internships Put Students on Path to Success May 24

Determination and imagination can change the world — and it doesn't have to cost a fortune, fashion-industry icon Kenneth Cole told graduates at Merrimack College's 67th undergraduate commencement exercises Sunday. 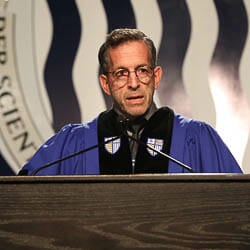 Unable to afford space to preview his budding line of ladies shoes during Market Week in New York City in 1982, Cole told a packed Lawler Arena, he devised a scheme to sell his merchandise from a 40-foot trailer near the Hilton Hotel. Upon discovering that such permits were only granted to utilities and production companies, he incorporated Kenneth Cole Productions with the purpose of making a full-length film, “The Birth of a Shoe Company.” Within three days, he had sold 40,000 pair of shoes to passers-by, including some of the most important buyers in the business.

“The best solutions are not always the most expensive, but the most creative,” Cole said.

As his business and influence grew — Forbes named Kenneth Cole Productions one of the 200 Best Small Companies four times — Cole immersed himself in charitable giving. He was at the forefront of fighting the HIV epidemic in the 1980s, and today is chairman of amfAR, the American Foundation for AIDS Research. He also supports environmental, LGBTQ and homelessness causes by donating a portion of company sales to social and charitable organizations.

“I couldn’t change the world alone, but I realized I could be an accessory,” Cole said.

Culture and society are changing at light speed, Cole said, portending a remarkable future. Diseases will be eradicated. Artificial intelligence will perform half the jobs in the workforce. We’ll be transported by driverless cars and, eventually, drones.

“Embrace change, but don’t be changed,” Cole said. “Don’t disconnect with what makes you, you.”

Student speaker Jenna Coviello, of West Boylston, Massachusetts, told her classmates that, while change is inevitable, the memories of the last four years will endure.

“Although we may leave the Merrimack campus behind, the Merrimack experiences, values, friendships and memories we will take with us,” she said.