Campus News › College dedicates new space for prayer by those of all faiths
Quick Links
Previous Article Merrimack grad on front line of battle against Ebola November 3
Next Article Men’s Soccer Selected to NCAA Tournament, Will Play Philadelphia University in First Round November 10

College dedicates new space for prayer by those of all faiths

Shareda Hosein, of Quincy, laid a carpet on the floor of the new Common Prayer Room on the second floor of the Sakowich Campus Center to perform the zuhr prayer, which is one of the five daily prayers for Muslims Wednesday. 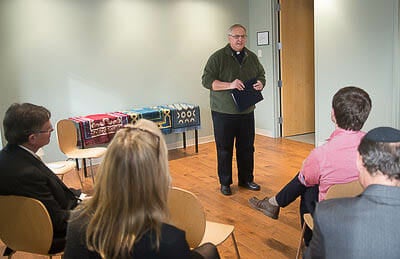 The room proved to be a good space for praying and it was nice that there were rugs available to use, said Hosein, who’s a community chaplain in the Boston region.

Just before Hosein prayed, members of the Muslim, Jewish and Christian faiths dedicated the new Common Prayer Room in a ceremony filled with beautiful prayers and fellowship Wednesday.

The room had been in the planning stages for years, said Joseph T. Kelley, the director of Jewish-Christian-Muslim Relations.

“This is a very important day for our college as we bless a prayer center for the students of many different faiths,” Kelley said.

The prayer center is the former office of the Rev. Ray Dlugos, Merrimack’s vice president of mission and ministry.

Planners wanted space that was quiet, protected and accessible to students so Dlugos offered his office and relocated.

It’s an airy, bright room with two small rooms off it where Muslims can perform ritual washing of hands and feet before praying, called wudu.

The prayer room is a place where people of all faiths and denominations can pray among themselves or together.

School officials were sympathetic when they learned Muslim students were praying in closets, the ends of hallways and behind desks, Kelley said.

“We felt that wasn’t right,” he said. “If we were going to invite them to the college we should meet their needs.”

Jewish, Muslim, Hindu, Buddhist, Catholic, and Protestant students got together to form the Interfaith Student Alliance (IFA) two years ago and made the prayer center its first project.

“It’s really just a beautiful part of the story that Father Ray felt in his heart to open this space,” said former Merrimack professor Celene Ibrahim-Lizzio, of the Andover Newton-Hebrew College CIRCLE program.

Dlugos’ sacrifice was a visible sign of the college’s work to sow seeds of interfaith understanding, Kelley said.

Faith believers will use the room for prayers and make it holy ground, Dlugos said.

“Our purpose is to dedicate it by use,” he said.

Rabbi Robert Goldstein, of Temple Emanuel in Andover, and an adjunct professor at Merrimack who is the former chairman of the board for the Center for the Study of Jewish-Christian-Muslim Relations said the prayer room will be sanctified by peace, prayer, thanks giving, and tears given through heartfelt prayers.

Religion is a fundamental part of bringing about peace and it’s not possible to connect with God if you ignore other people, she said.

“Dialogue should help to build bridges connecting all people in such as way that everyone can see in the other, not an enemy, not a rival, but a brother or sister,” Rowland said.

“The purpose of religious communication among human beings of different commitments is mutual enrichment and enhancement of respect and appreciation,” she read.

Lizzio, of the Andover Newton Hebrew College offered a greeting from the Islamic community, reading a reflection on prayer written by Feryal Salem, of Hartford Seminary.

Prayer takes a variety of forms within the Islamic community, including the five daily prayers known in Arabic as salat, Lizzio said. Salat is from the root of the word sila, meaning “connection.”

By performing the five daily prayers, a Muslim forms and strengthens their connection with the Divine, Lizzio said.

After the dedication, Maura Shaffer, the academic advisor to 173 international students, including 36 from Saudi Arabia, said one of the places students found to pray was a storage space at the Center for Academic Enrichment so the new prayer room is a wonderful opportunity.

“It’s a nice thing they have this space,” she said.