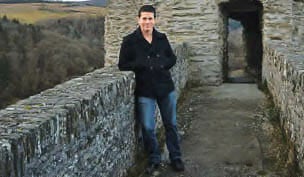 If there ever was a student able to deliver on the Fulbright Program’s mission to promote international goodwill through the exchange of students—it’s Ryan Matthews. In the spring of 2013, Ryan was awarded the prestigious Fulbright Scholarship to study and teach in Turkey during the upcoming academic year.

Scholar in and out of the classroom

As an undergraduate student at Merrimack, Ryan studied romance languages, specifically Italian and French, as well as Jewish-Christian-Muslim Relations. Continuing his education at Merrimack as a graduate student in the Higher Education Fellowship program, he worked for Dr. Dan Butin, Dean of the School ofEducation, and collaborated on a website for the Center for Engaged Democracy, a hub for academic programs focused on civic and community engagement. Ryan’s advisor, Dr. Susan Marine, describes him as, “incredibly bright, talented, and committed to fostering intercultural understanding.”

Ryan’s work outside of the classroom distinguishes him as well. Ryan spent the past few summers volunteering with the Augustinians in San Gimignano, Italy to help the friars take care of and manage groups of visitors from across the world. While in San Gimignano, he met another Augustinian who invited Ryan to his home in Kinshasa in the Democratic Republic of the Congo, where he stayed for about a month. Dr. Marine comments on Ryan’s competence as a world traveler, “Ryan has a deep commitment to learning as much as possible about other people and places.”

Ambassador in and out of the classroom

Ryan first learned about the Fulbright Program from an Arabic instructor from Tunisia in the United States on a Fulbright Scholarship. He applied for and was awarded an English teaching assistantship, and will be placed in a university to assistant teach English for a full academic year while he receivesTurkish language instruction.“

I love languages,” explains Ryan, “so the program is perfect is me. I’m able to have the chance to study an unfamiliar language from what I’m familiar with and teach others English in the process. I’m also extremely interested in the history of Turkey, building upon what I learned in my courses in Jewish-Christian-Muslim Relations.” While Ryan will certainly gain immeasurable benefits from his Fulbright experience, Dr. Marine is focused on what he’ll give back, “Ryan will be an excellent ambassador for the United States, building bridges of understanding between our country and others. Plus, he is very easy going, and takes adversity well, so whatever the challenges his time in Turkey may bring, I am confident he is up for them! Ryan’s approachability and enthusiasm for adventure will serve him well as he embarks upon his journey.”

Ryan looks forward to his Turkish adventure, commenting, “The most exciting thing for me is exploring a country, language, and culture that is completely new to me. It’s tough to pinpoint why I find it so exciting, but I find it very rewarding to be dropped into situations where everything is completely unfamiliar.” There’s no doubt that Ryan’s time in Turkey will help make the world a little more cohesive as he forges connections with diverse and interesting people all across the globe.