Criminology majors get a real-world experience

Merrimack College criminology students shared their internship experiences and excitement in a poster session in the Sakowich Campus Center. 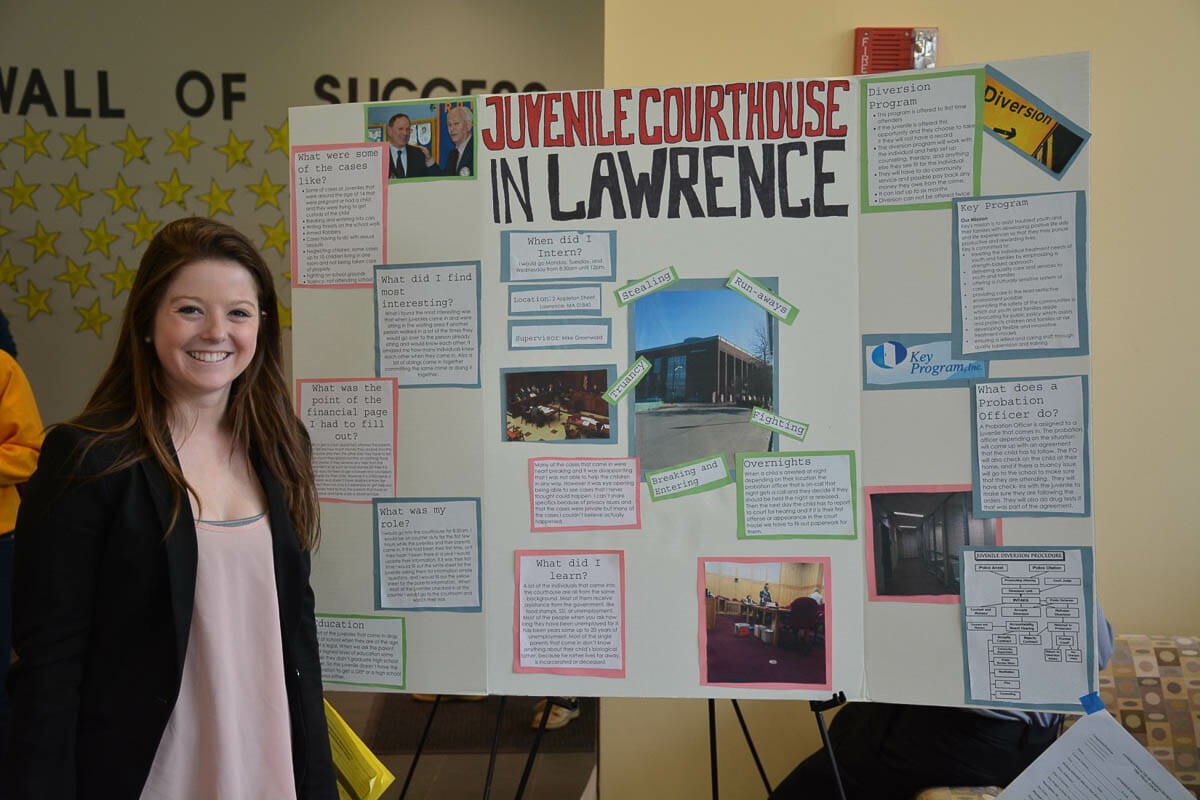 “It’s always my favorite event,” said assistant professor Brittnie Aiello, the intern coordinator. “It’s a great complement, after they’ve been in the classroom, to apply what they learned and get real world experience.”

There are about 150 students in the criminology major established in 2008; they are all required to do an internship for one semester but they can do a second semester as an elective course.

Reactions to internships can be surprising. Some quiet or reserved students come alive during their experience, Aiello said.

“They really thrive when they are out there in the world,” she said.

Meghan Reynolds ’16 of Holden, Mass., is a criminology and psychology double major. She interned at the probation office in Essex County Juvenile Court – Lawrence, Mass. She hopes for a career as an intercessionary for juveniles, possibly with the state Department of Children & Families or Department of Youth Services.

Reynolds had a well-defined purpose for her poster.

“I just wanted people to know about the programs they offer,” she said. “The stories of the juveniles who came in were heartbreaking.”

Kyle Shields ’16, of Burlington, Mass., is also a criminology and psychology double major but he interned with the Woburn, Mass. Police Department’s detective bureau. As part of his internship he worked on cold cases, went on patrols, worked in the communications center, and followed the drug task force during a prostitution sting.

“It was really a great opportunity,” said Shields who wants to be commissioned a U.S. Navy officer then work for a federal law enforcement agency. “A lot of interns sit behind a desk and shed paper but this was hands-on.”

Nicholas Hannan ’15, of Mashpee, Mass., is a criminology major with a focus in pre-law who previously interned with the Georgetown, Mass. Police Department but wanted to learn more about what happens after a suspect is arrested and booked so he did a second internship with Lowell, Mass., attorney Peter J. Parlow where he learned more about the court process.

Hannan learned about criminal, family, and landlord-tenant law. He visited courthouses in Woburn, Lawrence and Cambridge.

Hannan said he learned about procedures, drafting legal forms and creating court calendars for scheduling as well as interview techniques for defendants.

“This is literally probably the best experience I ever had,” said Hannan who wants to be a lawyer. “Peter taught me so much.”