Spanish professor Lynn McGovern used a Provost Innovation Funds grant for a research trip to Cuba so she can put together a study abroad proposal for Merrimack students. 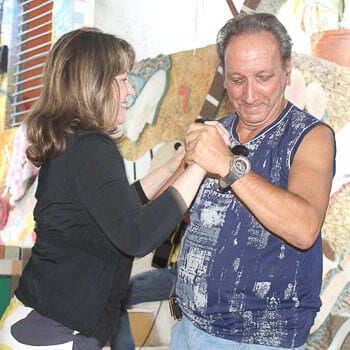 McGovern came up with the idea after President Barack Obama announced Dec. 17 plans to begin normalizing relations with communist Cuba.

“I used my grant to go to Cuba to do on-the-ground investigation as to what would benefit our students,” McGovern said.

She traveled with 19 other college and university professors from across the country for five days in March.

McGovern’s proposes a multi-disciplinary learning program to cover topics such as healthcare, theater, jazz and dance; as well as a comparison of the socio-economic systems between the United States and Cuba.

The Spanish Studies Abroad office working through the Universidad de La Habana could combine service learning with language and lectures on culture, according to McGovern.

“It’s the next big phase for study abroad,” McGovern said.

The island nation about 90 miles off the coast of Florida has an amazing public health system that Merrimack students could study through service learning, she said. They would learn some of the ways that Cuba has created such an effective medical system where people have a life expectancy greater than Americans.

“What are they doing right that we aren’t,” McGovern wants to know.

During her visit in March McGovern learned medical students go to hospitals for hands-on experience compared to students in the United States who stay in the classroom.

Doctors in Cuba are generous with their time and expertise, traveling worldwide to help. They have been instrumental in fighting the Ebola outbreak in Africa, McGovern said.

“Even more interesting, than healthcare is the arts, music, painting, dance and drama,” McGovern said.

She saw street performers, musicians, and dancers with a fervent love of their arts, she said.

McGovern noticed that in the United States dancing and singing are usually done indoors but in Cuba the artists take to the streets to share their work with appreciative audiences.

The process of renewing relations between the United States and Cuba is fascinating on political and religious levels, McGovern said. Catholicism has been outlawed since Fidel Castro and Che Guevara led the 26th of July Movement to overthrow President Fulgencio Batista in 1959 but Pope Francis is serving as an intermediary for the talks to normalize relations with the U.S.

Students on the study abroad program could compare the Cuban government’s ideals at the time of the revolution to the reality of today.

“It would be interesting to study where they got it right and kind of change the mentality in force at the time of the revolution,” McGovern said.