Exhibits Worth a Triptych to the Rogers Center

Two new exhibits in the Rogers Center for the Arts showcase the work of photographer Kevin Salemme, the director of media instructional services for Merrimack College, and artist David Raymond, a former professor for Merrimack's Visual and Performing Arts Department. 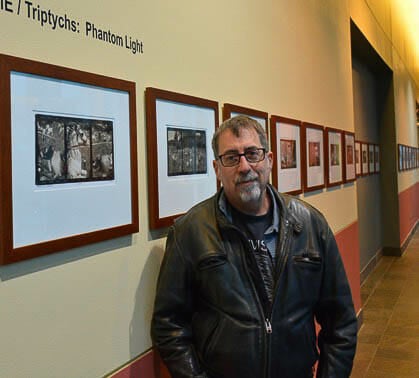 Raymond’s work is on display in the McCoy Art Gallery until March 10; the opening reception is 1 to 3 p.m. Sunday, Jan. 27. Salemme’s photography is on display until April 7.

Each piece in Salemme’s exhibit “Triptychs: Phantom of Light” uses three photographs of the same subject taken from three slightly different angles to form a picture of the whole. Most of Salemme’s photographs were taken during Merrimack’s annual Pellegrinaggio to Italy (a tour of important Augustinian sites) and school trips to New Mexico.

Triptych is a straightforward idea to convey a sense of “place” that is less of a physical presence and more of a spiritual presence. The form was popular in Christian artwork, from medieval through the Renaissance periods.

“Even though there is nobody in my pictures, I think there is a spiritual quality to the place,” Salemme said. “I think it comes from the idea that people have spent time there.”

His exhibit includes a triptych of the Gare de Lyon train station in Paris. It is the station through which most World War I soldiers passed on their way to the Western Front. “For a lot of them it was a one-way trip,” he said. “So when I am in the train station I can’t help but think of all the souls that passed through there. There is a human presence you can feel in one way or another.”

Raymond’s artwork may be best known on campus for his abstract sculpture “Emmaus” outside the Rogers Center. The sculpture includes two spheres separated from a third sphere by a wall. The wall represents the barrier between knowing and not knowing, which is a theme that has a long history in artwork, Raymond said. In addition to painting and his sculptures, Raymond works with steel.

“I want you to imagine how long it took,” said Fr. Richard Piatt, O.S.A., director of the Rogers Center and professor in the Visual and Performing Arts Department. “From a distance, you get one, single, unified image but the closer you get, the more patterns — images — the more pictures. You get a sense of molecular breakdown but you also get a sense of what’s going on in David’s mind.”

Raymond said he wants viewers to tour the shapes as if traveling through space. “The viewer moves through spaces by following the patterns that are suggested by the circles,” he said. “If you don’t move, you don’t learn.”

The works are reminiscent of aerial landscape art. From a distance the spaces between the patterns contained within the works may appear as clouds, Raymond said. But he doesn’t expect the viewer to see what he sees.

“One of the things I’m interested in happening is this transfer of ideas or feelings … becoming a population of forms that I invite the viewer to travel in this space that I have created, a kind of map to where I go,” he said. “How the viewer sees it is very different than how I see it.”

“I feel David’s work is one great big hug of the world,” Salemme said, “inviting you into the landscape and saying you are part of this world, we are in this together.”