Merrimack's online radio station, WMCK, is starting its second season with expanded programming — including heavier involvement by faculty and staff on the microphone. 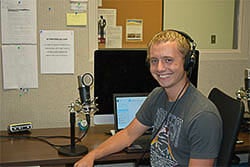 Blocks of time will be set aside for non-students to talk, play music, tell stories, or impart life lessons, said the station’s faculty adviser, associate professor Jake Turner, chair of the Department of Communication and Media.

Since many faculty and staff members are reluctant to commit to a regular weekly show, the station is letting them sign up for just one or two shows a semester.

Programming can run the gamut from entertainment to scholarly work, he said.

The new program will give students a chance to learn how to produce programming with hosts who don’t know the technical side of radio. Five students are on the team that will set up the microphones and get the mixers adjusted correctly, so faculty and staff only need to show up to the studio in Cushing Hall and talk or play music without learning the ins-and-outs of radio production.

WMCK is scheduled to start broadcasting for the school year over the Internet Sept. 19; the first non-student show is expected to air Sept. 20.

In another sign of growth for the radio station, volunteers are planning to get involved in special events such as the Involvement Fair and the Fresh Check Day, a mental health awareness day outside the Sakowich Campus Center Sept. 15.

“We’re trying to get more out and about the campus to get people to know WMCK is out there,” Turner said. “One of our goals is to increase our promotion and listenership.”

Brian Mills ’18, a communications major from Plaistow, N.H., and vice president of the station, is looking forward to the remote broadcasts from the Sak and doing live radio as fellow students walk past.

The station had to focus energy toward finding on-air talent last year but there’s a strong lineup of DJ’s this year so the focus will be on drawing listeners, he said. The faculty and staff going on-air should help build the audience.

“I feel like having faculty involved not only gets them to support the station in general but also gives students another reason to listen because they will know their professor is on live and that will advertise the station as well,” Mills said.

The station wants to make sure freshmen get involved with the station. When the semester starts, the station will put out a call for DJs with the hope of getting some first-year students on the air, Turner said.