Faculty and staff recently packed the Center for Excellence in Teaching and Learning for simple but informative refreshers on how to identify, support and help those suffering through mental illnesses. 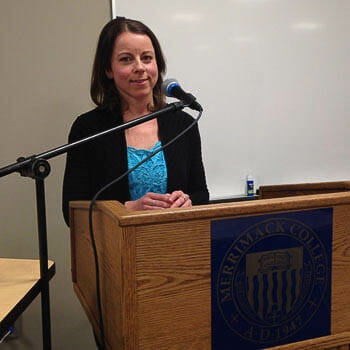 A similar session was held in Cascia Hall for students.

The biggest challenge to treating depression is recognizing the symptoms and realizing it is a physiological illness, said featured speaker and mental health advocate Meg Hutchinson of Boston.

It often strikes young people when they are in their late teens, after years of physical change and moving away from home for the first time, forcing them to adapt to a new community.

Students may not even know they are suffering from depression, Hutchinson said.

“We think: buckle down, we can get through this,” she said.

Help is available on campus through Hamel Health or the Police Department.

Hutchinson was encouraged by the number of faculty who said they have taken students personally to Hamel Health Center for help.

“I love the fact there are three mentions of walking somebody there (to Hamel),” Hutchinson said. “You don’t know how hard it is to walk yourself there.”

People who suffer depression can mask it better than people who suffer physical ailments. They often hide their pain through high achievement, hoping to make their families proud, but isolate themselves from others and often have flat eyes showing they can’t enjoy their accomplishments.

“You can’t fake a twinkle in the eye, the light in your eye,” Hutchinson said.

Hutchinson suffered from bipolar disorder for nine years before her sister raised the specter of clinical depression.

“My sister did say (the word) depression and I was horrified,” Hutchinson said.

She felt the first signs of depression during her freshman year of college. Her mind felt foggy, everything around her seemed to slow down, she was always tired and her self-worth declined.

“The problem with mental health is it undermines your sense of worth from the beginning,” she said.

When she realized she couldn’t make it through the spring semester she left school under the guise of helping a friend cope with an addiction, because she was afraid of bringing shame to her family.

Hutchinson kept her mental illness a secret for nine years until she had what she called a full-blown breakdown.

Hutchinson’s sister finally had her committed to a hospital but rather than being resentful, she looks back with gratitude.

“To me, that was the most loving thing she’s ever done,” she said.

Hutchinson was initially afraid that once her secret was out people wouldn’t trust her but soon realized people were there to support her treatment.

“To my great shock, by being open about my diagnosis I was closer to everybody in my life,” she said.

It turns out seemingly everybody has a story about depression and mental health. They have either been managing on their own, or have a family member or friend who is suffering.

It’s critical that campus officials work with family members and learn who will be supportive and who will make the situation worse once a student is diagnosed with depression.

“The other thing that’s important is the role of faith,” Hutchinson said.

A person’s heart, soul and spirit remain healthy even during mental depression and that can be an ally when working with a malfunctioning brain, she said.

Hollis praised Hutchinson for recognizing the importance of spirituality in recovery. Campus Ministry is often the gateway for students to get treatment, he said.

“We’ll have students come in just to talk.”

Hutchinson, who’s a musician, suggested setting up mental health meetings around concerts or poetry readings that students are more likely to attend than a generic meeting in a classroom.

“When I go in as a musician I’m kind of in disguise,” she said.

Nielsen asked whether there are questions one shouldn’t ask when suspecting somebody is depressed. Hutchinson agreed it can be a tricky scenario, because the high achievers will hold on to their disguise but you can ask questions that can’t be interpreted as attacks, such as asking simply how they’re doing. Supporters should reinforce the notion that depression is a physical illness to prevent any sense of guilty feelings.

“All those questions that can get around it in a delicate way would be really helpful,” Hutchinson said.

Kendall warned faculty not to delay taking action if a student’s writings concern them. Only Hamel Health carried a true confidentiality on campus, she said.

“You’re not violating faculty-student confidentiality at that point because you are concerned about the student,” Kendall said. “We can be very discreet about these things.”

The March 19 meeting was just the first step in opening up discussions about mental health issues on campus, Nielsen said.

“Starting to have this conversation today is an enormous first step,” she said.