First Lecture looks at what makes a person an individual

Greg Lingley loves the rough and tumble worlds of football and rugby but when it was time for him to talk about what's dearest to his heart during the sixth annual First Lecture Feb. 17 he looked into the things that make up a person's character and individuality. 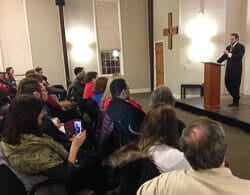 “Family. Tradition. Structure. Competition. Challenge. Information,” Lingley said as he addressed about 100 friends, family and faculty. “Who I am comes from my experiences and what I’ve learned from them.”

Without each of those elements that make him the man he is, he’d crumble and have to put himself back together, said Lingley who turned 22 years old Tuesday.

Each person takes their own experiences and uses them to help define themselves, Lingley said.

He isn’t aware of any other college in the country that has First Lecture.

Lingley, who’s a senior English major and wants to be a teacher, hated it when professors or high school teachers assigned papers and let the students choose the subjects but that’s what he had to do for First Lecture. The challenge with an assignment like that is capturing and holding the reader’s or listener’s attention without knowing what they want with any certainty.

Lingley struggled with deciding a subject for his first lecture, the goal, and how to define his audience.

He checked the Internet for ideas, watched past First Lectures on YouTube, asked friends and family for ideas but was stumped until coming up with the idea of jotting down his thoughts in a notebook about a month ago.

If Lingley’s First Lecture were a movie it could have been called The Red Notebook. He used a red notebook as a journal to bring under control the challenge of writing his lecture.

“I put this red notebook by my bed. I took it almost everywhere I went,” Lingley said. “Idea by idea I pieced together a paper, a paper with no sense of direction but one common interest. These things in here, the red notebook, these experiences and lessons are all important in shaping who I am today and why I know what is important to me is actually important.”

Family for Lingley is more than blood lines. To him, close friends are the same as family and family comes before all other concerns.

As a family member or member of a team or organization, he wants to represent that group with dignity and class.

“As they say, ‘Character is defined by the choices you make when no one is looking,’” Lingley said. “I try to act like everyone is watching all the time.”

Tradition is important to Lingley and when he breaks tradition it feels as if he’s broken a code but at the same time understands he has to try new challenges and experiences in life.

“I love the traditions in my life, which only makes sense because if you don’t enjoy doing something you shouldn’t do it.”

Structure is an important theme in Lingley’s life. Whether it’s working out at a gym or studying. He’s at his best early in the morning when he’s focused and he likes the idea of getting more done with his day than others who sleep late.

“I know not all people are structured or even like structure but it is something that I am always looking to improve upon my schedule,” Lingley said. “Structure in my day makes me keep going.”

Competition is an important part of Lingley’s life. His family is extremely competitive during family outings.

“I think that is a standard that society has put on us,” Lingley said. “If you’re not as good as someone else, they will get the job, or the rost sport, or the girl, or the money, or whatever it is.”

Challenges are similar to competition, he said. The greater the risk-reward factor the better the challenge. Stress motivates Lingley and moves him toward productivity.

“My most recent test has been this speech,” Lingley said. “I wanted to make something impressionable. I wanted to create a new way of thinking in those that came to listen to me.”

Lingley closed by imploring his audience to push themselves toward personal improvement without losing site of who they are already.

First Lecture was sponsored by Division of Mission and Student Affairs, the Student Government Association and Omicron Delta Kappa.