Campus News › From Andover to Malaysia with Love, Friends for Life
Quick Links
Previous Article Merrimack Closes Record-Breaking Campaign with Evening of Celebration September 19
Next Article Renovations Underway on Chapel in Austin Hall to Give it a New Look September 24

From Andover to Malaysia with Love, Friends for Life

Emily Kearns '82 was just a 16-year-old junior at Andover High School when she heeded the call of her adventurous spirit to spend a year in Malaysia through the American Field Service's foreign exchange program. 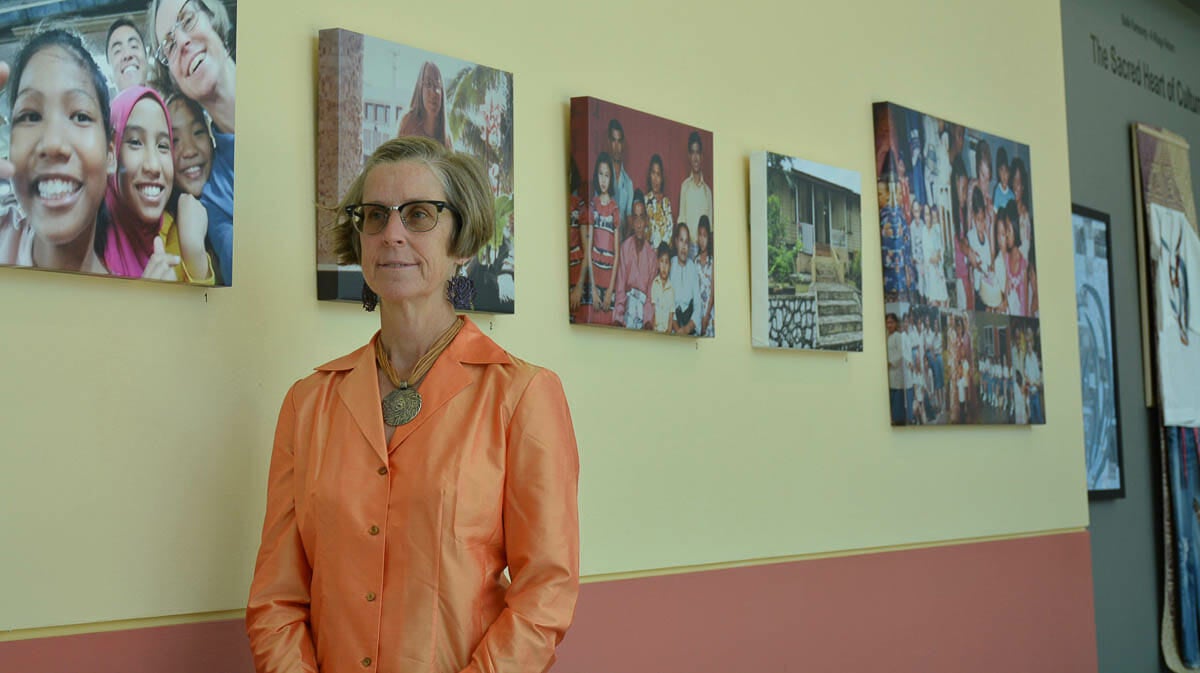 She volunteered for France, Switzerland, or “anywhere.” She got anywhere, which turned out to be Malaysia.

Her father Donald Kearns, founder of the Math Department at Merrimack College, was ecstatic. He’d spent time in China, India and Burma in World War II and was pleased his daughter would be exposed to Eastern culture.

In February 1977, Kearns flew out of Los Angeles with a handful of other students from around the country, headed for the city of Johor Bahru on the southern tip of Malaysia. From there the students were split up and assigned to host families around the country.

Kearns, a devout Catholic teenager, was assigned to live with a devout Muslim family in a house that was home to four generations. The pairing could not have gone better.

“That was a commonality; that we were devout,” Kearns recalled.

She did not speak Malay and the host family members did not speak English. So Kearns relied on a tape recorder and a dictionary to learn the language. Her five-year-old Malaysian brother helped teach her, drawing pictures of things like a fish and then giving Kearns the proper word. Within three months she acclimated to the culture and language.

“It was total immersion,” she said. “It’s amazing how fast you learn when you have to eat, go to the bathroom, or sleep.”

Kearns remains friends with her host family over the span of four-plus decades and has returned to visit five times since her year abroad. The last visit was in July 2018

She is now an installation artist and is exhibiting a multimedia piece “Balik Kampung — A Village Return” at the Thagaste Gallery in the Rogers Center for the Arts depicting a love for her host family and the impact it has had on her life.

The art is a bricolage of materials including photographs and video from her last trip, letters, cards and blue jeans.

In companion literature to her art, Kearns said she used mixed media to “open inner spaces as the symbols, texts, and materials used, create a collage of meaning and emotion.” Each piece of Kearns’ art is carefully paired with the pieces on either side of it to create a meaning to itself and to the whole.

“It creates an initiative and invitation to understand the incredible power of cross-cultural sharing,” Kearns said.

Her art carries added importance in an age when there is heightened global and national tension between cultures.

Viewing the installation is free and open to the public from 9 a.m. to 4 p.m. daily through Sept. 27. For more information visit www.balikkampung.org or call the Rogers Center at (978) 837-5367.