Pioneer Scholars - recipients of full scholarships to Merrimack College - were recognized for their achievements during Gov. Charlie Baker's 2020 State of the Commonwealth address on Tuesday. 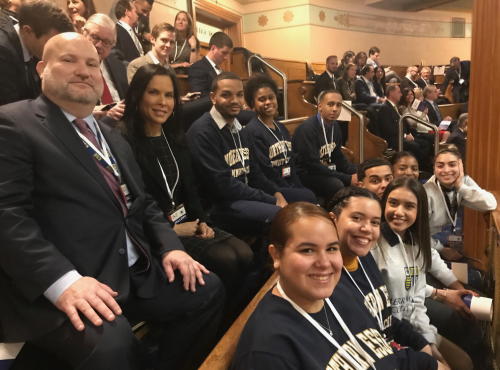 Pioneer Scholars were praised by Gov. Baker during his annual State of the Commonwealth address.

Several Merrimack College Pioneer Scholars attended Gov. Charlie Baker’s annual State of the Commonwealth address Tuesday Jan. 21, 2020 where they received the largest ovation of the night from assembled legislators. They were recognized for their academic success with the Early College Program while still students at Abbott Lawrence Academy.

The Pioneer Scholars were joined in the House Chamber of the Massachusetts State House by five students from Northern Essex Community College who also completed the Early College Program.

“Stand and be recognized,” Baker told the students as television cameras panned toward them. “Congratulations, scholars. I know I speak for everyone here tonight when I wish you all the best as you continue your education.”

Merrimack is the only private college or university in the state to earn recognition from the Baker-Polito Administration for its work preparing underrepresented high school students for the rigors of college academics at no cost to their families, while at the same time earning college credits.

Merrimack’s Pioneer Scholars program awards 10 full scholarships to the top students from each class of the Early College Program. Freshmen Omara Ocosta, Julissa Bejar, Ilaisa Garcia and Carlos Reyes are among the first recipients and attended the governor’s address with School of Education and Social Policy Dean Isabelle Cherney.

“Governor Baker’s shoutout to the students and Merrimack College was amazing – they had the longest standing ovation of all,” Cherney said. “I think the governor did a wonderful job introducing his administration’s new educational initiative around early college.”

The Early College Program started at Merrimack with about 60 11th graders from Abbott Lawrence Academy during the 2017-2018 school year. Students take one college course each semester during their junior and senior years of high school so that by graduation they have earned 16 or 20 college credits, said School of Education and Social Policy Associate Dean Russ Olwell.

“Pioneer Scholars have already been with us two years,” he said. “By the time they show up at Merrimack as full-time students they are already confident.”

While the state is committing an unprecedented $1.5 billion to education, Baker said, the money alone won’t fix the education system. Initiatives such as the Early College Program are important resources to help students find their footing and blossom, he said.

“This is our chance to give every child in the Commonwealth the opportunity they deserve to be great,” he said. “And we should fully embrace it.”