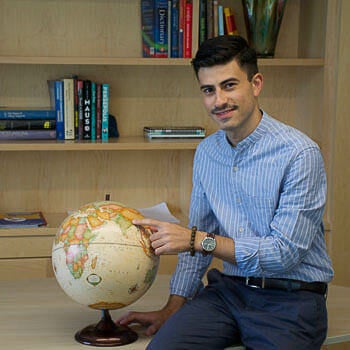 President Christopher E. Hopey made the announcement during his State of the College address and led the applause for LaTorre.

“First of all these awards are extremely difficult to get,” said philosophy professor George Heffernan who advised LaTorre during the application process. “Purely numerically, the chances are one in 10.”

LaTorre, 20, of North Andover, will work as an assistant in a school where he’ll help develop English curriculum and offer insights on American culture.

At Merrimack LaTorre was a member of the Honors Program and majored in psychology with a minor in religious studies focused on Asian religions, but he’s also certified as an English as a Second Language instructor.

He’s scheduled to attend a Fulbright orientation in Washington, D.C. in June then wait until Nepal’s academic calendar starts in March 2016 to start his fellowship.

LaTorre said he doesn’t know where he’ll be assigned but has been warned it could lack electricity or running water.

“After the earthquake (in April) the State Department sent out a message saying no Fulbright scholars will be sent to any parts affected by the earthquake,” he said.

LaTorre said he competed against some of the best young minds in the country from high-profile schools such as Harvard, Brown and Yale universities, but his love for Nepal helped in the application.

“I think for one thing I think I have a very distinct passion for that one area (of the world) and that must really show especially in my writing,” he said.

LaTorre had to write a one-page single-spaced essay on why he deserved the scholarship. After 10 hours of editing with help from Heffernan and other professors, he decided to start over.

The essay ultimately talked about the need to improve female literacy and economic opportunities, and the need for Nepal and America to develop a better understanding of each other.

Heffernan tried to talk LaTorre out of applying for the Nepal assignment and instead go to Germany, since he speaks the language.

“When I told him I wanted to apply for Nepal he thought I was crazy because of the unlikelihood of a Nepal Fulbright fellowship,” LaToree said.

But his heart was set on Nepal. He visited the country a few years ago and was mesmerized by the terrain more than 5,000 feet above sea level and the people who eke out lives where crops can’t grow.

The Fulbright fellowship, and working with the State Department, could open professional doors for LaTorre. Career options include working in the Foreign Service as a diplomat or working for non-governmental organization on development in Nepal. Ultimately, he wants to ensure that part of the world is just and peaceful.

“I’m probably going to end up after Nepal working in China for a little while, because China is my regional area of interest,” LaTorre said.

The State Department’s Bureau of Educational and Cultural Affairs sponsors the Fulbright Program, named after the late Arkansas senator who supported the creation of the United Nations and was a longtime foreign policy expert in Congress.