A conversation with College Leadership Council member Richard H'15 and Susanna Gallant, advocates for the Together for Good Campaign. A seasoned entrepreneur with multiple business interests, Richard is also the President of the Middlesex Islanders, one of the premier development and competitive hockey programs in New England. The Gallants and the Middlesex Islanders are also the founding partners and investors of Merrimack's Gallant Arena. 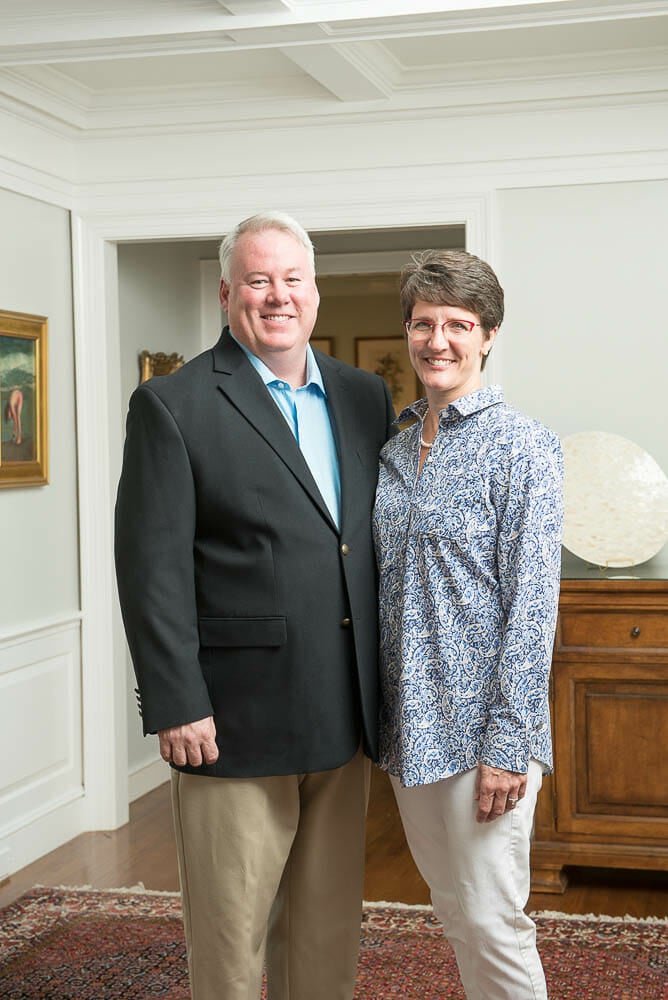 How did the partnership between you, the Middlesex Islanders, and Merrimack College come to fruition?

Richard: I played hockey as a child, and when my eldest son Mark began playing, I started coaching the Middlesex Islanders’ Club Juniors. I then took a more active role in the program—in 2011 we had 15 teams, and this year, we’ll have 78. Shortly after I became the new steward of the Islanders, I met President Hopey at a Merrimack hockey game. It was before the College even launched the Agenda for Distinction, and I was in the right place at the right time to help kick off a meaningful fundraising initiative to facilitate improvements like the new rink and the women’s ice hockey program.

We wound up providing $3.7 million to support the project including covering construction expenses that helped bring the rink and Academic Innovation Center to life and built tremendous momentum.

Susanna: Richard and Dr. Hopey have really forged a strong partnership. Their attitude is “let’s make it happen.” Their entrepreneurial spirits match perfectly. It’s tremendously exciting to see the changes that have occurred as a result.

Richard: President Hopey envisioned having the new facility and hockey interface with Merrimack College’s culture. And that’s where the Islanders come in. Merrimack has this wonderful facility, and when they’re not using it, President Hopey would like us to use it in a way that benefits the community, enhances the College’s visibility, and welcomes new people onto campus. It’s worked extremely well, and we’ve had more than 2 million visitors walk through that building because of games and other events.

Susanna: The Merrimack teams have connected with the Islanders youth teams as well. The kids have a unique bond with the college students, and some of them have even gone on to play ice hockey for Merrimack.

Richard: The College has two wonderful hockey coaches, Mark Dennehy and Erin Hamlen, who participate in the community. Mark is the only Division I coach that allows people to share his home, meaning the rink. And Erin is doing a fantastic job. Her players love her and the program is on the rise. The College is lucky to have two outstanding individuals running their programs.

What role have you taken on Merrimack’s Together for Good Campaign?

Richard: I’m a vice chair of one of the Campaign’s initiatives—Competing for Good—which has a fundraising goal of $6 million. Susanna and I pledged $600,000 to help launch the athletics program as part of the comprehensive campaign. The funds are earmarked to build a new outdoor Athletic District and to support Merrimack’s goal of becoming a Division 1 athletic institution.

In my role, I’ve had the opportunity to talk about the College’s vision and the transformation I’ve seen during the last several years. I’ve seen incoming class sizes increase dramatically, new majors and programs added, and new infrastructure built. I’m very proud to be part of it. Because Merrimack is an organization on the move, it’s very easy to support it.

Tell us a little more about your professional and philanthropic experience.

Richard: I worked on Wall Street for a couple of different firms for 13 years. Today I have a financial surety company called Global Technology Finance and a company that fixes endoscopes called FiberTech Medical.

Susanna and I became involved with many of our philanthropic efforts through our children. The Islanders have a large community impact component, and it’s also the number one fundraiser in the country for Autism Speaks. I sit on the Board of Trustees at The Fenn School, Susanna works with the folks at Nashoba Brooks where our daughter Sarah goes, and we’re also getting involved with Lawrence Academy where our daughter Rachel is enrolled.

How have you applied your professional and philanthropic experiences to your role at Merrimack?

Richard: A lot of the work I did in mergers and acquisitions and on Wall Street centered on strategic planning. So, I understand how to build support for Merrimack’s vision—whether it’s bringing top students and faculty to campus or raising funds for the College.

The most successful businesses these days consistently evolve. And that’s one of the things that President Hopey and I both believe in. No matter what we’re involved with, we try to get better all the time. When you look at Merrimack College, it’s not just about athletics—it’s about athletics, academics, and the student experience. President Hopey is always pushing to make everything at Merrimack better.

Susanna: There are so many positive things going on at Merrimack. If you are an alumnus—or even if you’re not like me and Richard—the momentum makes you want to allocate some of your resources to help out. It’s not like giving to a university with a large endowment where your contribution feels so small. Your contribution is really noticeable, whether it’s $100 or $1,000.

What do you hope your giving will help accomplish?

Richard: When we first started working with Merrimack, we were able to have an immediate impact to get the overall program moving forward. Then, the vision expanded to encompass new academic programs, faculty, buildings, and athletic facilities. Today, there’s much more of a multi-faceted execution. There’s a master plan and plans for each academic and athletic discipline. The Together for Good Campaign is designed to help finance all of those initiatives. As a result, instead of financing a specific venture, now we give to support the overall mission of the College.

What does Together for Good mean to you?

Susanna: I think of it in terms of the long-term commitment we’re making. Together, we’re committed to Merrimack’s progress and development. Since the beginning, it’s been exciting to see the College grow and provide so many services to so many people. I look forward to what the future holds.

Richard: To me, Together for Good symbolizes the connections between the community, faculty, students, alumni, trustees, and the president. Merrimack has created a culture where everyone is connected, and we’re all working together to achieve a positive outcome.