A Merrimack professor's new book examines the first post-independence challenges to the United States and Massachusetts governments, in hopes of spurring student interest in a critical event in the development of the Republic. 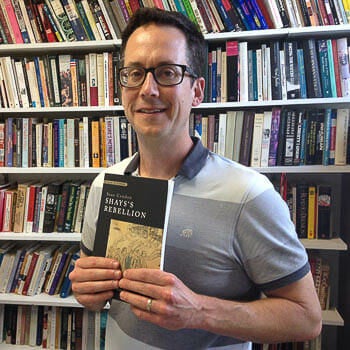 “This is really written with the undergraduate student in mind,” said Condon, the History Department chairman.

The rebellion of 1786-1787 is named after Daniel Shays because government leaders saw him as the mastermind, but he was only one of many leaders from central and western Massachusetts, Condon said. The rebellion pitted farmers and others against a state Legislature controlled largely by merchants, lawyers and their allies from the eastern part of the state.

Condon’s book follows the government’s suppression of the uprising and the after-effects, including its influence on the framing and ratification of the U.S. Constitution. He hopes the book will foster an interest among students to delve deeper into the issue.

“What I try to do in my classes is to raise compelling questions and tell interesting stories,” Condon said. “If I can make students more curious and interested in the past, then they become more willing to do the hard work involved in making sense of historical documents and interpretations.”

His previous work usually focused on Revolutionary War-era slavery in the South but as a professor at Merrimack, he’s always looking for local history that may be familiar to his students and that’s how he got interested in Shays’s Rebellion.

Following the Revolution, the Massachusetts government was dominated by residents of Greater Boston, who were concerned with inflation and who wanted to pay off both the state’s debt and its share of the federal debt incurred during the war with Britain.

The government imposed taxes that were in some cases higher than those that had been paid to England before the war, Condon said. Farmers were faced with the possibility of losing property or being thrown in debtor’s prison.

In response, the farmers demanded lower taxes, more paper money, relief from their creditors, and more time to pay off debts they’d accrued while serving in the war.

At first, the farmers and their allies petitioned the state Legislature but found little relief. When that failed, many of the farmers of western Massachusetts — many of them veterans of the Revolutionary War — organized into armed groups protesting Boston policies in the same way they had opposed British rule.

Legislators saw the uprising as a threat to the court system, the legislature and property rights. They accused farmers of being lazy and told them to live within their means.

“It’s an austerity program like the German banks are telling Greece right now,” Condon said. “Look, you guys have to tighten your belts or you’re going to be in default.”

The conflict raised questions of what a legitimate government is and what kind of protest is legitimate, he said.

“If you feel your rights are being infringed upon, and that your views are not being considered, what opportunities do you have?” he said. “I think that’s a question we’ve struggled with since then.”

Ultimately, the rebellion was squelched. Even though some participants were sentenced to death, most of the sentences were overturned on appeal, pardoned or commuted. Shays was pardoned for his participation and leadership.

“Shays’s Rebellion: Authority and Distress in Post-Revolutionary America” is available through Amazon and Barnes & Noble Booksellers for $19.95.