How’d he do that? Magic man baffles crowd

Paul Malionek '15, is a human development major who wants to work in higher education but is also a pretty talented magician who put on his first public performance for nearly 100 people in Cascia Hall Feb. 19. 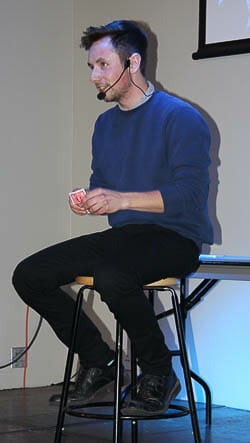 “I had a blast,” Malionek said. “Everyone seemed to enjoy it so that made me happy.”

He specializes in slight-of-hand magic tricks and mentalism that baffle his audiences and recently started his own YouTube account.

He took up magic in middle school in Newburyport Mass., but didn’t get serious with it until his second year at Merrimack when he performed a simple card trick for a roommate.

“It started there and really hasn’t stopped,” Malionek said. “I just like the idea of doing something (seemingly) impossible right in front of their eyes.”

To him it may sound corny or cheesy but Malionek said he likes the way magic can make people smile.

“I love it because it’s new, it’s refreshing, it’s surprising,” she said.

Malionek enjoys watching performers such as illusionist David Blaine but his brand of magic works best for audiences that aren’t too close when during the shows.

He prefers the type of magic, such as card tricks, where his audience is close at hand because it makes the effect better.

“Up close you’re seeing everything as it happens and it’s hard to pick that out,” Malionek said.

Also, unlike Blaine, Malionek doesn’t like the showmanship part of performances.

There are no real-life Hogwarts and Malionek hasn’t apprenticed with any magicians so he learns the art of magic in bits and pieces, here and there. He reads books, visits magic shops, or watches other performers to get ideas.

Learning a trick depends on how complicated the sleight of hand may be. Some tricks only take an afternoon but at least one of his tricks took a week to master.

“Some are a little more nacky than others,” Malionek said. “Sometimes learning a trick can be uncomfortable the way you hold something or hard to conceal something.”

Malionek picked Cascia Hall for his first performance for its intimate setting.

As an intern in the Office of Student Involvement and a volunteer with the Merrimack Programming Board, he’s helped set up a number of shows on campus and appreciates how good the MPR can be in the Sakowich Campus Center but a show like his could disappear in such a large venue.