New students are encouraged to take advantage of all that Merrimack has to offer and Nathan Persampieri ’24 is planning to do just that when he starts this fall. 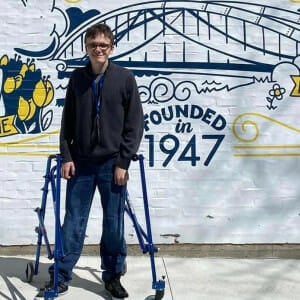 Nathan Persampieri ’24, standing in front of the Merrimack mural.

Once he is settled in for his first semester at Merrimack College, Nathan Persampieri ’24 says there is a lot he hopes to get involved with.

Through his work in state politics, he hopes to get fellow college students excited and involved with the upcoming election in November. As an advocate for people with disabilities, he plans to work alongside the North Andover chapter of the Understanding Our Differences, an organization dedicated to fostering inclusive schools and communities, for which he serves on the advisory board. And as a person living with a rare neurological diagnosis, the Austin Scholar wants to shift conversations and efforts around diversity, equity and inclusion to include people living with disabilities.

“I am excited,” says Persampieri, who will start at Merrimack as a junior after graduating from Massachusetts Bay Community College this past spring. “I‘m really passionate about advocacy, specifically dealing with people with disabilities. I want to study a major in social justice with a minor in public policy and political science.”

Persampieri, who was diagnosed with Spinocerebellar ataxia type 29, said he picked Merrimack not only for its campus, but also because he believes he can get the personalized support he would need to thrive in college. Through his time at MassBay and Merrimack, Persampieri said he hopes to see how Understanding Our Differences’ programing, which currently focuses on elementary school, could be expanded to higher education.

“It was a wonderful organization,” he said. “Because of COVID they had to move their work online and they did a great job.”

Ingrained in all of Persampieri’s work is the goal that people with disabilities will never be judged for their disabilities. “I always tell people not to be afraid to see the person first,” Persampieri explained. “Because then the disability is an afterthought.”