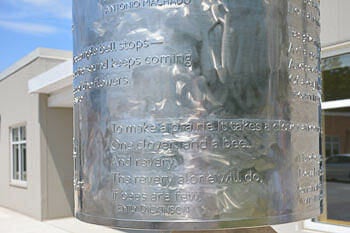 “It’s got a literary component but it’s visual art as well,” Cohen said.  “It’s a fabulous melding of short, iconic poems with visual art and is an arresting beacon for the Writers House.”

The stainless steel sculpture includes a poem wheel with poetry by such writers as Emily Dickinson, Antonio Machado, and Vera Pavlova printed in raised lettering.

Curci originally hit on the idea of creating a poem wheel inspired by the Tibetan prayer wheel, and proposed it for a war memorial competition as long as 30 years ago. When the idea was rejected, Curci filed it away and pursued other projects.

The sculpture that was finally created for the Writers House happened by serendipity.

Curci was dusting off the war memorial idea about the time his old friend Cohen approached asking him to fabricate an unrelated project from another artist to put on campus.

During conversations about the fabrication, Curci shared his vision for a poem wheel sculpture based on the prayer wheel concept.

Cohen loved the idea and commissioned the project.

“There was this sort of lovely meetings of the mind on this,” she said.

The Tibetan prayer wheel promotes compassion and connection to people and the natural world; the poem wheel is meant to marry literary and visual art forms.

“The idea is to have people pause to think of the words and environment,” Curci said. “The driving force is to have great sculptures that are connected to the natural world.”

Most of Curci’s work is inspired by the environment so he often draws inspiration from solar or wind energy. Stainless steel has a durability that does well outdoors.

Curci’s stainless steel sculpture is 15 feet tall. It has a granite base supporting three three-sided pyramids that climb toward the poem wheel topped with a spire and wind sculpture at the top.

Curci likes the stacked pyramids on his piece because they add perspective to the sculpture and create an illusion the center of the artwork shifts.

“Part of it is, I enjoy the shape and planes but there is also a humor about the perspective, making you feel the balance is changing and it animates the sculpture,” he said.

There’s no deliberate symbolism in the work but the column shape does have a strong influence from Romanian sculptor Constantin Brancusi who used four-sided pyramids in his work.

Stainless steel is a difficult medium with which to work and the raised lettering on the poem wheel had to be cut by a machine guided by software.

“It cut for 240 hours continuously to cut the letters for that,” Curci said.

He had to change the machine’s cutter every few hours.

Cohen plans a formal dedication when students return from summer break during which Curci can talk about his work as an artist and creation of the prayer wheel.