It won't be on your radio dial, but Merrimack is starting its own student-run station on the internet this fall. 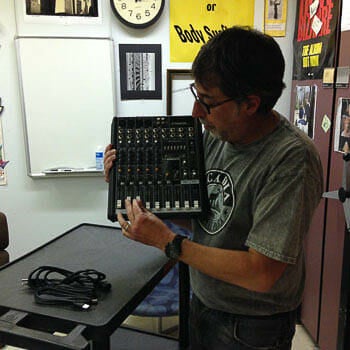 WMCK was the brainchild of Honors Program student Lisa Vassallo ’15, who handed on the mantel of leadership to Lindsy Goldberg ’16, a communications major from North Reading, Mass., who’s co-president of the Student Government Radio Club with Michael Giammasi ’18.

WMCK will go live sometime between mid-September and early October.

“It will be available via the TuneIn app, as well, for mobile devices,” Goldberg said.

Students running the radio station are taking a radio production class with adjunct professor Melissa Gaudette, who has worked for stations such as WBZ-AM in Boston.

Kevin Salemme, Merrimack’s media instructional services director, is providing technical support for the station. He has collected a console, dual CD player, mixing board and microphones to get ready for the launch, including some equipment that was donated.

“It should be fun,” Salemme said. “Students have been asking for it for a while. It’s really cool we’re moving forward.”

A radio studio is being built in Cushing Hall.

The Internet station won’t need a Federal Communications Commission license, but since it’s a training ground for students, the staff of volunteers will follow FCC guidelines, Turner said.

The format will include music, sports, and campus community news from The Beacon student newspaper. Most of the programming will be indie music, Goldberg and Turner said.

It’s too early to say what WMCK’s first song will be, Goldberg said.

The first broadcast may be the station’s official ribbon cutting, Turner said.

Goldberg is passionate about music and the ways it can connect people to each other or express ideas.

She has interned with WXRV-FM (The River) in Andover and is a former member of The Boston Globe’s street team.

Turner had his own two-hour radio show at Virginia Tech on Friday nights while attending college in the late 1990s.

Most of Salemme’s experience is in the video field, but the transition to radio won’t be hard with a few adjustments of equipment, he said.

“I’ve done a lot of (microphone work) but mostly in video, but the theory is the same,” he said.

Organizers made a field trip to Simmons College in Boston to check out its radio broadcast operation.

“It’s nice to see the technical setup is similar to what I was planning,” Salemme said.

Internet radio is in its infancy but there are high hopes its popularity will grow in the digital age.

“It’s something I think will gain traction but it’s not real big right now,” Goldberg said.

With fewer students using radios, Turner is hopeful the Merrimack community will tune in through laptops.

“They can hear their friends, they can hear Merrimack updates,” he said. “It’s a way to connect with the campus.”

The station is using Backbone Radio as a technical platform from which to broadcast, Turner said. Backbone will offer radio content even if WMCK is off the air, using rebroadcasts or material from a repository.