Merrimack College Health Sciences Department Associate Dean Kyle McInnis is using his summer Clinical Research and Design class to take his Active Science program to the woods, and that is making all the difference for scores of elementary school children from Lawrence, Mass. 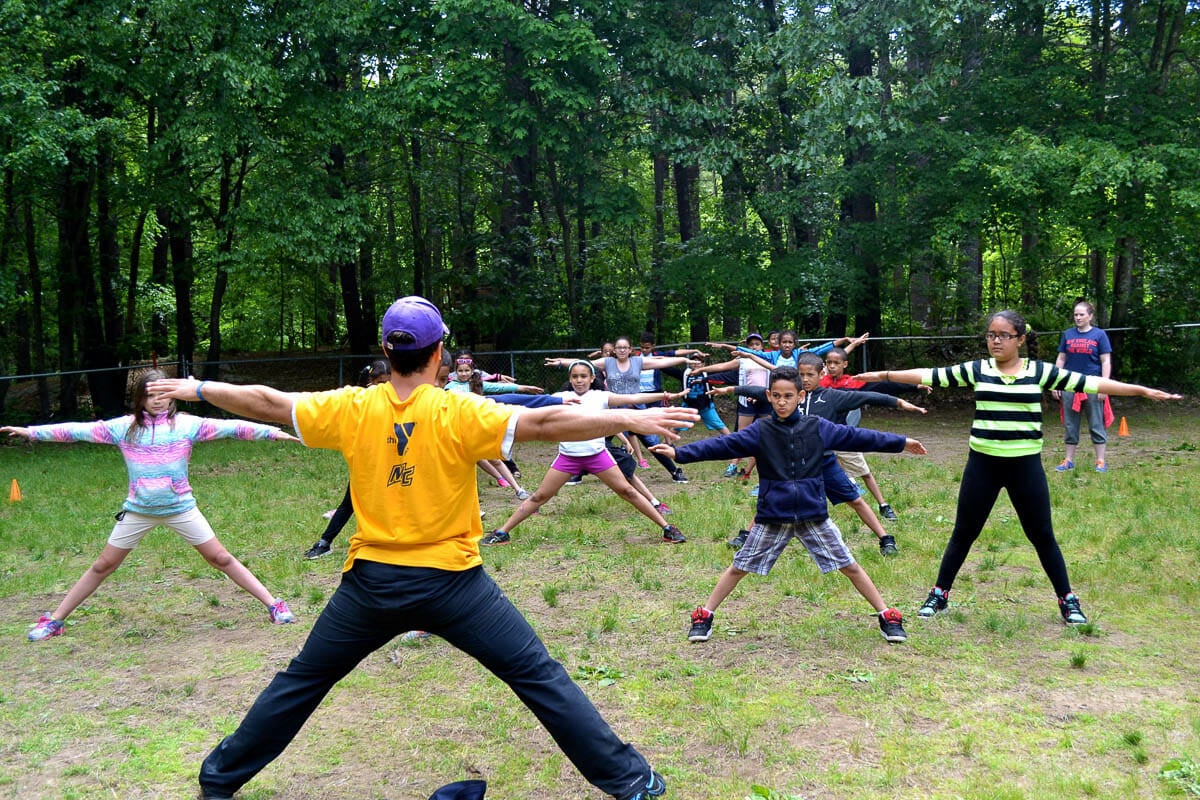 Merrimack teamed with the Merrimack Valley YMCA to run Active Science at Camp Otter in Salem, N.H. for fourth and fifth graders from the Leahy School one week and the Frost Elementary another week recently. The five-day program integrates physical activity with STEM learning initiatives in student-led research projects.

“The whole focus of the camp is physical activity and science,” said Jacquelyn Rudis, director of operations and development for the Active Science program.

The prestigious Robert Wood Johnson Foundation, the nation’s largest philanthropy devoted solely to health and healthcare, awarded McInnis a $1.05 million grant to expand his innovative Active Science program. In partnership with the Merrimack Valley YMCA, the grant is helping increase physical activity levels and science achievement among school-age children. It is expected that thousands of children, mostly from underserved communities across all regions of the country, will enroll in the program during the initial 24-month grant period.

Active Science is a registered social enterprise founded by McInnis. It engages children through use of mobile gaming technology that primarily involves a trademarked mobile application and data management system that turns children’s personalized physical activity data into interactive lessons that teach fundamental concepts in science, technology, engineering and math (STEM). The foundation grant is funding operational costs as the non-profit social venture ramps up, but the program is eventually expected to be self-sustaining as youth organizations like the YMCA license Active Science for a fee. The social investment model is key to long-term sustainability.

The curriculum is aligned with the National Science Standards but the way in which it’s presented and how the students engage it is new.

Many schools around the country have eliminated gym class or have reduced recess time because of budget cuts, said Merrimack student DeVonte Jones ’16, of Baltimore, Md., who’s a business management major with a focus on marketing enrolled in Clinical Research and Design. Going out to Camp Otter was a transition for the city kids. At first they had to be prodded into the activities as they got acclimated to their surroundings but soon got comfortable among the leaves and roots and occasional bugs.

“At first they don’t know what to expect,” Jones said. “Now the kids are just running around having fun like it’s their backyard.”There aren’t enough nice things to say about the Active Science program, said Leahy fifth grade teacher Joanne Watson who was working with Merrimack’s students to watch closely over her students. The fourth and fifth graders learned the can-do spirit through the activities while their friends cheered them on and their new woods skills are transferrable to academics, she said.

“It’s tremendous for these kid to have the opportunity to learn teamwork, learn necessary skills, and take risks in a safe environment,” Watson said. “The program; I can’t say enough about it. ”

One morning during camp, the elementary students were playing a game of ga-ga in an octagonal arena with a big yellow ball and each time a student was hit on or below the knee they were “out.” In order to get back in the game, each student had to perform some calisthenics.

The students each wore a pedometer or accelerometer and after 30 minutes of activity they uploaded information to e-tablets about their motion such as number of steps taken, the distance traveled and calories burned. From there they were asked STEM-related questions based on their personal information. For example, they could be asked how many steps they would take in a two-hour period based on the 30 minutes of activity. Eventually, they compared their date with that of their friends’.

Fourth grader Laysha Perez, 11, was “out” at ga-ga and had to do 20 jumping jacks before getting back in the game.

“I’m having fun and I don’t have to learn,” Laysha said. “This is a fun time for the end of the school year.”

That’s part of the beauty of Active Science, Rudis said. Students are learning plenty about science and math but it’s not drudgery and they don’t realize they go home better educated than they arrived.

Farther on in the woods, Joel Vizcaino, 11, had taken part in a climbing and rappelling activity in which he had to climb 35 feet up a utility pole while strapped in a safety harness and walk across a horizontal pole before belaying to the ground.

“There are a lot of fun activities,” Joel said.