Lessons of Faith: Alumna’s Bequest to Strengthen Center for the Study of Jewish-Christian-Muslim Relations at Merrimack

Eileen Jennings '64, admits that she spent most of her life largely unaware of the specific teachings of the Muslim religion, and its many similarities with Christianity. But that changed dramatically in 2007, when she met an Afghan man named Israr who has since brought religious tolerance, sustaining friendship, and a new calling into Jennings' life. Today, through the Center for the Study of Jewish-Christian-Muslim Relations Jennings has reached out to share those gifts with the Merrimack community. 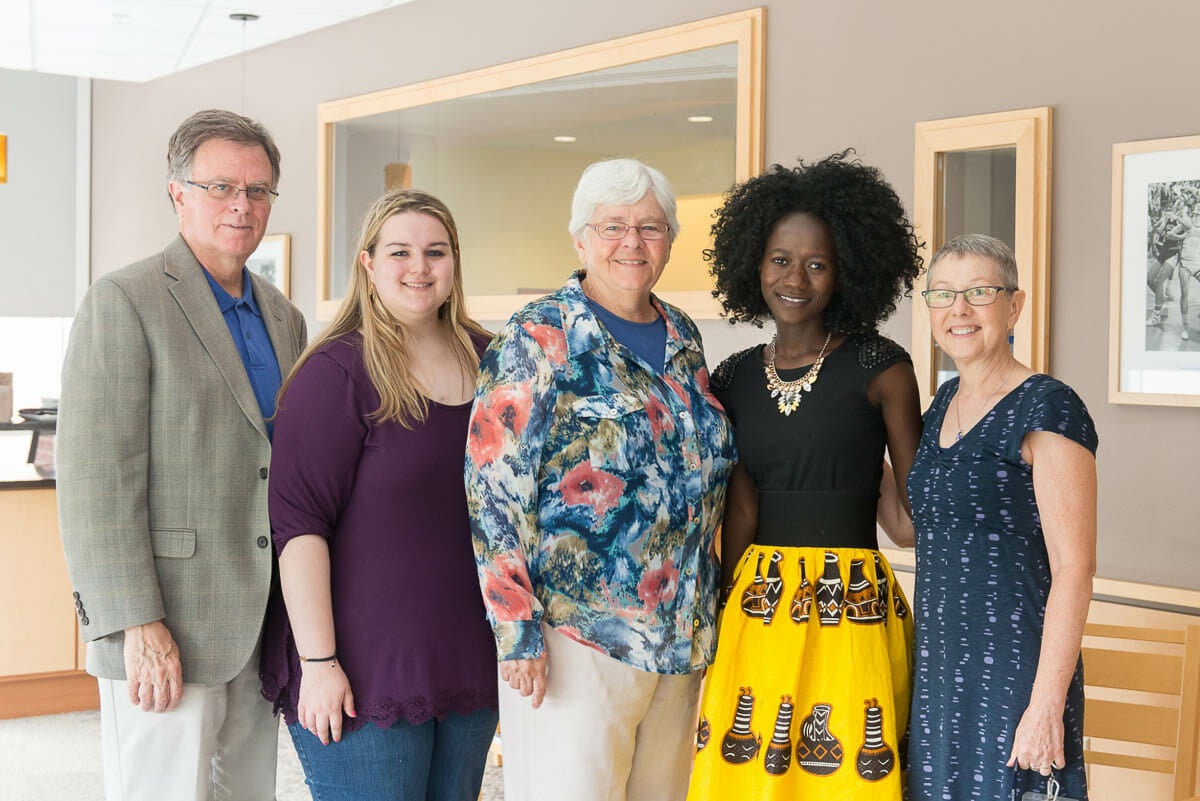 Since she retired as general counsel of Central Michigan University, where she spent her 29-year career after earning a JD and PhD from the University of Nebraska, Jennings has also pursued her international interests as a member of Rotary. It was through that role that Jennings became acquainted with Israr, who traveled from Afghanistan to Jennings’ town of Mt. Pleasant, Michigan as a Rotary Ambassadorial Scholar for the 2007-2008 academic year. As Israr, a husband and father of six, pursued his master’s degree at Central Michigan University, he and Jennings built a powerful friendship over conversations centered on his devout Muslim faith.

“Israr was the first person I’ve had a chance to speak with in-depth about Islam,” says Jennings. Through those conversations, Jennings says, she became struck by the misconceptions promoted by popular culture when it comes to the teachings of Mohammed and the beliefs of Islam.

“Unfortunately, there is just a lot of ignorance among Americans about Islam in general,” continues Jennings. In particular, as she and Israr spoke at length, Jennings was “amazed” by the extent of the common belief systems shared by Christianity and Islam. During one conversation at Jennings’ kitchen table, she and Israr realized that they were sharing two distinct-but-recognizable versions of the story of Joseph and his brothers. “From there, we would share stories all the time, comparing the Old Testament and the Quran.”

Over time, Jennings and Israr came to see each other as family. “I never had children, so it was such a blessing at this late stage of my life to be given this grown, wonderful son,” she says.

After Israr returned to Afghanistan, he invited Jennings to visit his home during a window of relative stability in the country. Her trip to stay with Israr, his wife and six children, who call Jennings ‘Nana,’ further opened Jennings’ eyes to the riches of the country, the faith of its people, and the opportunity to bridge divides through understanding and tolerance.

After her trip, Jennings learned that Merrimack had launched the Center for the Study of Jewish-Christian-Muslim Relations, dedicated to enhancing religious and cultural literacy among students and young adults. Immediately, a light bulb went on for Jennings. “I said, ‘Oh, this is exactly what is needed,’” she says. “I became very enthusiastic when Merrimack added Muslims to its long tradition of outreach to other religions, and formalized that outreach through this center.”

Jennings stayed informed of developments at the center through Merrimack communications, and in 2014, when she traveled back to campus for her 50th class reunion, the time felt right for her to get involved. Inspired by the work of the center and the growth she observed while visiting Merrimack, she designated a generous endowment—including a cash gift as well as a posthumous bequest from her retirement fund—to support and expand the center’s programs. Jennings expects the gift from her estate will total about $500,000.

“With Eileen Jennings’ generous gift, we can confidently continue our vital work: to help our students become better global citizens by fostering understanding and respect for those of other faiths,” says Joseph Kelley, professor and director of the center. “Her donation will be used to fund the center’s teaching, research, curriculum, and co-curricular initiatives, including programs that focus on building competence and appreciation for the Muslim faith.”

For Jennings, the contribution is the ideal way to tie her legacy with the mission of Merrimack College. Her ultimate hope is that her gift will provide Merrimack students with greater “interfaith competence,” so they can break down stereotypes by understanding what other faith traditions are really about.

“Saint Augustine said that we should find out what God has given us, take what we need and give the remainder to others,” she says. “God has blessed me with more than I need, and I am happy to be able to share the excess so the lessons I’ve learned from Israr can benefit the entire Merrimack community. I hope that my gift will inspire others to give back to Merrimack and to remember their alma mater in their estate plans.”

About the Center for the Study of Jewish-Christian-Muslim Relations

Cultivating the practice of Abrahamic hospitality, the Center for the Study of Jewish-Christian-Muslim Relations at Merrimack College provides religious, ethical, and cultural literacy education.  Recognizing the importance of educating future generations who will live and work in an increasingly diverse world, we strive to counter destructive prejudice and increase mutual understanding among those with differing beliefs. The Center: