It's a job that's been a lifetime in the making. Earlier this month, Merrimack librarian Elizabeth Sarkodie-Mensah returned to her native Ghana to prepare for her new role as that West African nation's permanent representative to the United Nations Educational, Scientific and Cultural Organization, known as UNESCO. 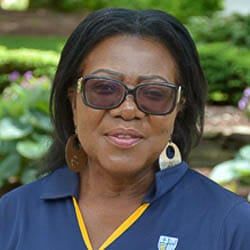 Sarkodie-Mensah, a librarian and social anthropologist by training, said she has yearned for a job where she could leverage her personal and professional experiences and interests in service to others.

“My background and experience make me uniquely qualified for UNESCO,” Sarkodie-Mensah said. “It has the mandate to implement all the United Nations sustainability goals dealing with education, science and culture.”

Sarkodie-Mensah majored in French and Spanish as a college student in Ghana. After graduation, she moved to the United States, where she earned a master’s degree in library science at Clarion University in Pennsylvania.

Following a brief stint as a librarian in New Orleans, Sarkodie-Mensah moved to Boston and earned a doctorate in anthropology from Harvard University. She then returned to library work, holding jobs at Harvard, Boston College, Modern Public Library, MassPort law library and Ropes & Gray law firm, before joining Merrimack in 2013 as the instruction/liaison librarian for the graduate program.

Throughout her career, Sarkodie-Mensah remained involved in Ghana politics, serving for eight years as a member of the opposition New Patriotic Party working in the United States. She was an active fundraiser for the party, and helped plan the visit of Nana and Rebecca Akufo-Addo, now Ghana’s president and first lady, to Columbus, Ohio, in 2015.

After rising to power last fall, the Akufo-Addos asked Sarkodie-Mensah to fill the UNESCO post.

“I’m really excited,” Sardokie-Mensah said. “My education, library work, studies in anthropology, French and Spanish — everything — has prepared me for this position.”

While Sarkodie-Mensah’s library colleagues are sad to see her go, they’re consoled by the knowledge she will be taking a bit of Merrimack with her to the United Nations.

“We’re thrilled that she will be bringing her commitment to information access and cultural stewardship from Merrimack to a wider audience,” library director Kathryn Geoffrion Scannell said.