A self-described lifelong learner and teacher, Anne Halley '67 credits her Merrimack education with providing her the opportunity to fulfill her dreams, leading her to earn multiple graduate degrees and enjoy a successful career in teaching and, later, management at the New York Times. Inspired by her Merrimack experience and to honor a dear friend who was never able to attend college due to financial constraints, Anne established the Anne Halley Scholarship in 2005 for underrepresented populations of students at Merrimack, later making an additional planned gift to the College. Elaborating on the inspiration behind her giving to Merrimack, Anne shares, “My experience and education at the College were priceless and inspired me to start a scholarship to give someone else the same opportunities I had.” 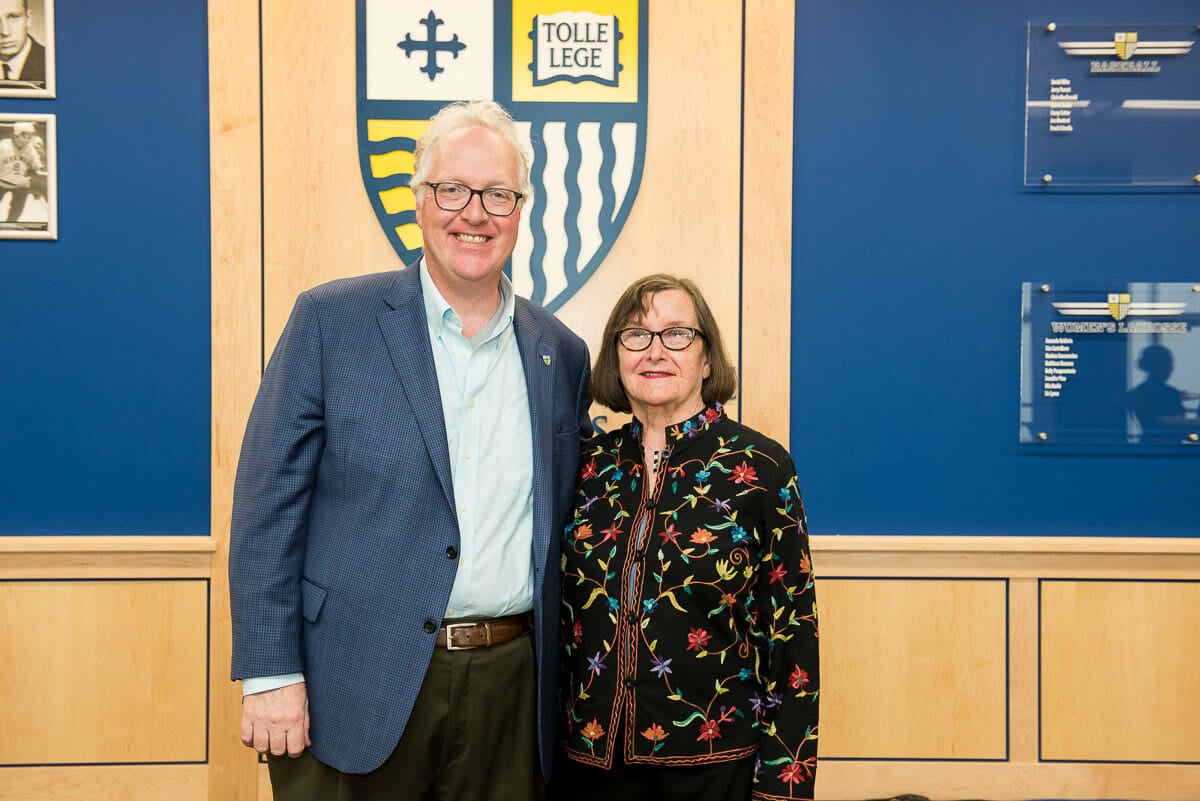 Raised in Lawrence, Massachusetts, Anne originally set her sights on attending college at an institution outside of the Merrimack Valley. With aspirations of becoming a teacher, she applied to a number of schools, recalling, “To be honest, Merrimack wasn’t my first choice. But the other colleges I was accepted to, they just seemed too big to me. In the end, Merrimack ended up being the best fit because of its small size.”

Once she arrived at Merrimack and dove headfirst into her studies, Anne found that the College’s small size was merely one of its benefits. The only female history major in her class, she quickly discovered the combination of major-focused and liberal arts courses fueled her passion for learning. “My educational experience was especially rich because each semester we had to take liberal arts courses, like literature and philosophy, that added so much to the history content I was also studying.”

Merrimack was an environment where Anne felt she could thrive, and she found her four years at the College to be a transformative experience – unlike anything she had encountered before in education. She explains, “Prior to coming to the College, I was a top student in my high school, but I was bored to death. When I went to Merrimack, I became alive. I found the education so stimulating, which turned me into a lifelong learner.”

After graduating from the history program, Anne’s passion for learning remained strong. She went on to earn a master’s degree and a PhD. Fulfilling her dream of becoming a teacher, she then went to work within the City University of New York system. Unfortunately, New York City entered a fiscal crisis, forcing the University system to make a large number of layoffs. Wanting to avoid the uncertain landscape of teaching at the time, Anne made the decision to pivot to an entirely new career, taking a position in advertising at the New York Times.

Approaching this career shift with the same sense of confidence she carried throughout her time at Merrimack, she states, “My liberal arts education made it possible for me to be flexible and succeed in an entirely new career.” And succeed she did. Anne worked her way from a part-time to full-time employee, culminating in a position as a Senior Manager. A true lifelong teacher, she never forgot the skills she learned during her time at Merrimack and beyond. She shares that throughout her tenure at the New York Times, she continued to find ways to utilize her teaching experience, especially enjoying the opportunity to help new hires learn the ins and outs of the industry.

While working in management at the New York Times, Anne found herself reflecting on ways she could give back and make a positive difference in the world. Although she wanted to support Merrimack students, she was hesitant and thought that her contributions would not be enough to make the impact she desired to have. “For years, I thought you needed to be a millionaire to start a scholarship. But one day, I finally took the initiative to call Merrimack and ask what I could do to help.” That call was the first step in establishing the Anne Halley Scholarship, an endowment providing financial assistance for a deserving student from an underrepresented population from the Greater Lawrence area of Massachusetts, which to date has supported five students, each for their full four years at Merrimack. Anne recalls, “Upon learning that a scholarship was possible, I became rather weepy, as it is a big thing to do and very rewarding.”

Over the years since establishing the Anne Halley Scholarship, Anne has enjoyed receiving letters and updates from recipients of the award. She recounts, “The majority of my scholarship recipients indicate how life changing the scholarship has been for them. To me, scholarship at Merrimack is the most worthwhile cause I can think of – to continue enriching people’s lives and give them a future that might not be possible without the help of financial aid.”

Encouraged by the tremendous growth of the College, and empowered by the impact of her scholarship donations, Anne decided to further the impact of her philanthropy by making a generous bequest intention to Merrimack. This bequest will support the Anne Halley Scholarship, providing financial aid for Merrimack students in perpetuity. “I wanted to do something for the greater good, by leaving my earnings to the College. It feels good to pass it along and make things possible for others that affects their lives in a positive way,” she shares. Now a proud member of the College’s 1947 Society, established to recognize Merrimack alumni, parents, and friends who demonstrate their generosity to the College through a planned gift, Anne says it feels “terrific” to be able to support Merrimack in a variety of ways.

And she encourages others to explore how they might be able to support Merrimack through giving. From annual donations to company matching funds, and even planned giving, she notes it is amazing to see how quickly support can add up. “Think about what you derived from your education and your experience at Merrimack, and pass it along. Let someone else enrich their lives through the same means. It’s a lot easier to give than you might think. Act on that impulse you may have, make that phone call, and find out your options.”