More than 450 Merrimack College students volunteered at 24 sites in the Merrimack Valley during the recent eighth annual Mack Gives Back honoring the military service of veterans. 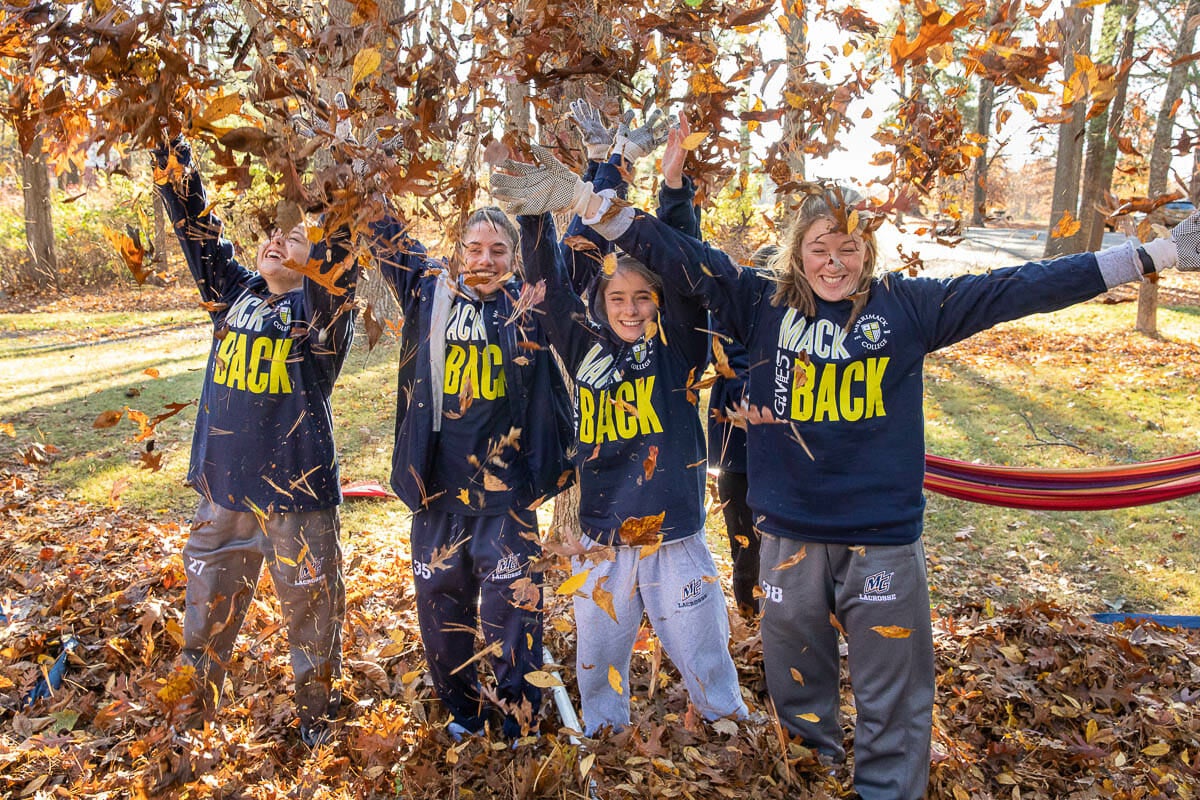 The biggest turnout was Saturday, Nov. 2, when students from more than a dozen clubs, groups and teams left the comforts of campus to lend a hand to nonprofit organizations in Lawrence, Lowell, Andover, Tewksbury, North Reading and Haverhill; as well as Salem, New Hampshire and Manchester, New Hampshire.

Students worked at a food pantry for children, cleared fields, bagged litter and blazed new trails in the woods. About 15 faculty and staff joined them in the College’s time-honored tradition.

“I am in disbelief at how much the students are able to accomplish,” said AVIS Land Manager David Dargie. “AVIS has new trails through deep brush and untamed land thanks to Merrimack College.”

The women’s lacrosse team has volunteered at Rolling Ridge Conference Center in North Andover for three years. Lulu Sweeney ’21, was thrilled to be at the wheel of a tractor, hauling firewood for the nonprofit conference center while her friends split logs, raked leaves and operated the zero-turn mower.

“I’m happy we can come back to Rolling Ridge every year,” said Kyra Clinton ’21. “We know what we’re doing and they’re very welcoming.”

Property Manager Greg Clarke said the lacrosse team lifts his spirits. As the only full-time person maintaining 38 acres — including nine acres of leaves — he appreciated the “90 man-hours of work” the players gave. “They don’t know what a huge deal that is,” he said.

“It’s inspiring to witness our students develop lasting relationships with the people at their service sites,” said Rosana Urbaez, who oversees the organization of the event for the College.

Merrimack’s first class of nursing students spent their first Mack Gives Back at Field of Dreams, a sprawling playground with trails in Salem, New Hampshire. It was a chance to bond as they cleared fields alongside Nursing Director Lynne Sheppard and anatomy instructors Lauren McDonald and Janet Ierardi.

In Lawrence, about 30 Merrimack resident assistants opened a new part of the Merrimack Valley Trail that will eventually connect Lawrence to Lowell. The College has helped out on the trail since 2016.

“We can now walk through without getting tangled in the bittersweet,” said Susan Stott, of Groundwork Lawrence.

Mack Gives Back takes place near Veterans Day to honor the sacrifices made by servicemen and women. Merrimack was founded in 1947 to educate World War II veterans.