Mack Gives Back is a community-wide series of service events where Merrimack students, faculty and staff lend a helping hand to local nonprofits and community partners. This year, the program went through a transformation to comply with COVID-19 protocols and packed more than 180,000 meals to address the growing challenge of food insecurity across Massachusetts. 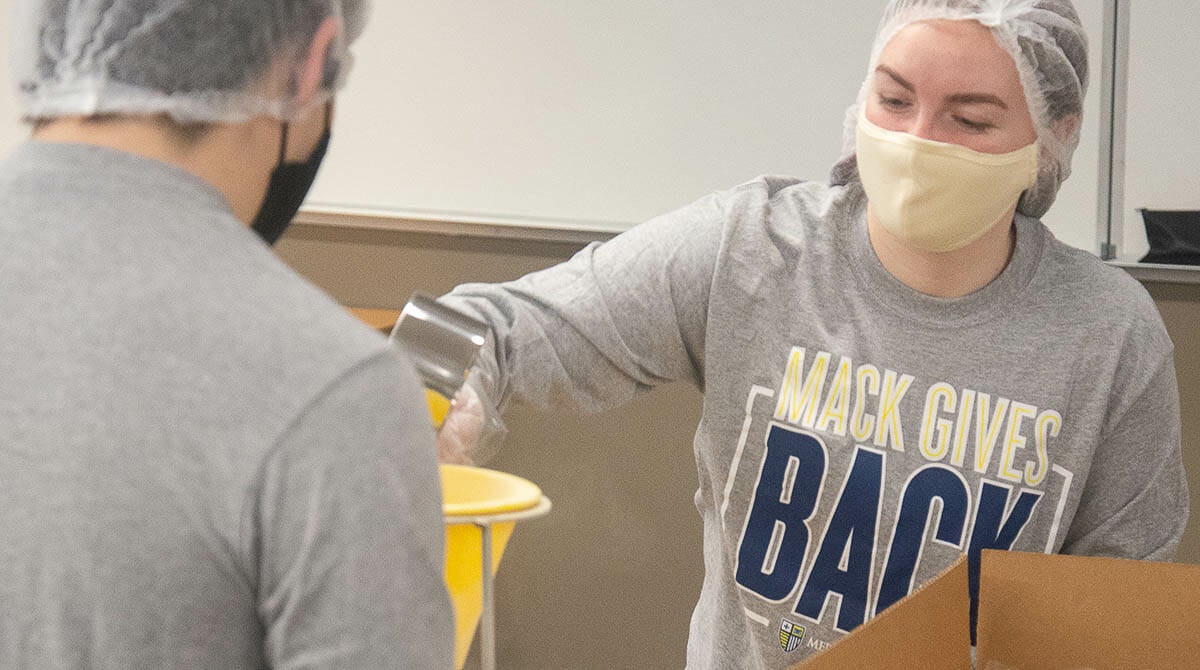 The COVID-19 pandemic has posed a number of new challenges to communities around the world. It has also exposed preexisting health and financial disparities, chief among them food insecurity. According to End Hunger New England, one in six hungry New Englanders live in the Merrimack Valley.

In response to the deepening food insecurity crisis, as well as COVID-19 social distancing requirements, Mack Gives Back organizers Rosana Urbaez and Lisbeth Valdez shifted the event’s focus. Instead of the event’s typical raking, painting and outdoor cleanup activities, Mack Gives Back transitioned to providing meals to nearby food pantries and soup kitchens. They partnered with the Outreach Program, a meal packaging nonprofit that delivered food directly to Merrimack’s campus. Mack Gives Back participants then packaged the meals that were picked up and delivered to those in need.

“We could only have so many students working in the room at one time so we had the idea to spread the love,” Urbaez says. “Instead of hosting just one event, we had three each semester for a total of six events this year.”

More than 1,000 participants worked in groups of 20 people or less in hourlong shifts during the six events. They packed more than 180,000 meals that went directly to the Merrimack Valley Food Bank and the Lazarus House.

“We found that we love this approach so much more than what we were doing before,” Urbaez says. “I also love the fact that this was providing a direct need to something that was happening in the community.”

The multiple events also added more options for students’ busy schedules; the Mack Gives Back team saw more than double the number of participants this year as they had seen in years past. Students shared that they were eager to give back to the community, even under COVID-19 restrictions. They said Mack Gives Back was a way for them to remain in their campus bubble and still have a positive impact on the broader community.

“We had so many students asking to do another shift,” Valdez says. “Another thing that was so wonderful was the energy when we had teams participating. We had the women’s basketball team, for example. They did so much, so fast. We had to tell them to slow down. They put us ahead of schedule.”

The Mack Gives Back team is hopeful for a slow return to normal this summer and into the next academic year. In spite of this year’s challenges, both Urbaez and Valdez say they would love to keep the on-campus model and bring it back tenfold. Once they can have bigger groups of students, Urbaez says, they will host even more volunteers and make an even greater impact on Merrimack’s neighboring communities. Another part of widening that reach is getting more intentional about the types of food provided.

“What we’re trying to do next is focus on cultural foods,” Valdez says. “We are serving the city of Lawrence which has a big Hispanic population. At Thanksgiving, for example, we tend to give out turkeys, but the Hispanic community doesn’t really eat turkey. So now that we have this new system under control, we’re trying to think through what this community really needs.”

Learn More About Mack Gives Back