Campus News › Master’s Graduates Urged to Never Give Up
Quick Links
Previous Article For One ‘Bright’ Student, Graduation Honor Beckons May 18
Next Article Cole to Grads: Embrace Change, Don’t Be Changed May 21

Master’s Graduates Urged to Never Give Up

Retired Air Force Maj. Mary Jennings Hegar, a decorated war hero who blazed the trail for female armed services members to serve in ground-combat roles, urged Merrimack master's graduates Friday to never back down from a challenge, even when things look bleak. 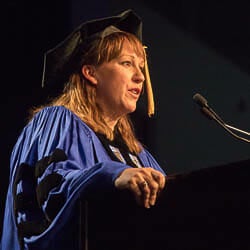 Hegar, who was awarded an honorary doctorate of public affairs during the ceremony in Lawler Arena, told graduates and their guests that she worked as an aircraft maintenance officer for five years before finally earning the opportunity to apply for Air Force pilot training. Through perseverance and hard work, she went on to serve three tours in Afghanistan as a helicopter pilot.

“I encourage you not to jump to your Plan B too quickly when life starts closing doors,” Hegar said. “View failure as an opportunity to keep trying to do what you want to do.”

Hegar also advised graduates to face their fears head-on, something she has had to do throughout her life. In 2009, Hegar saved the lives of her crew and her patients after the helicopter she was co-piloting was shot down by the Taliban during a search-and-rescue mission in Afghanistan — a feat for which she earned a Purple Heart and the Distinguished Flying Cross for valor. Three years later, she displayed a different type of heroism, joining a class-action suit that eventually led the U.S. defense secretary to lift the ban on women serve in ground-combat positions.

“When something scares you,” she said, “punch it in the face.”

On a lighter note, Hegar said she was proud to be associated with Merrimack, a college with a rich history providing education to veterans.

“I can finally call myself a ‘Warrior’ without sounding self-aggrandizing,” she joked.

She concluded her address by asking graduates to close their eyes, take a deep breath and visualize themselves a decade from now.

“Tell your future self ‘thank you’ for all the hard work and sacrifice. It was worth it, and you’re so happy you did it.”

Graduates were also inspired by the words of student speaker Latika Karnani, an international student who immersed herself in the life of the college while completing a Master of Science in Management.

“Fifteen months back, I was 8,000 miles away, in Mumbai, India, when I first visited merrimack.edu,” she said. “For some reason, the dream of becoming a Warrior instantly stuck to me, the colors blue and yellow stuck to me. Since that moment, this college has changed me phenomenally.”

Karnani encouraged her fellow graduates to search for what motivates them and to always give it their all.

“Find that something that brings you alive, because that’s what this world needs,” she said.

In his remarks, President Christopher Hopey urged graduates to take stock of all they have accomplished — and have yet to accomplish — because of their time at Merrimack.

“This is special moment in your lives to celebrate your success,” he said. “It’s a culmination of your hard work and dedication as Merrimack students. At commencement, we not only recognize all that you, our graduates, have achieved, but we also look ahead to what you will accomplish as educated and engaged citizens of the world.”

Approximately 380 advanced degrees were conferred during Friday’s ceremony, including 200 by the School of Education and Social Policy, 90 by the Girard School of Business, 80 by the School of Science and Engineering and 10 by the School of Liberal Arts. The latter group comprised the first graduating class of Merrimack’s new Master of Public Affairs program.