When Merrimack College math professor Mike Bradley walks into his Basic Statistics with Fantasy Football class for the first time this fall, he's going to ask a question that has stymied football fans since February: 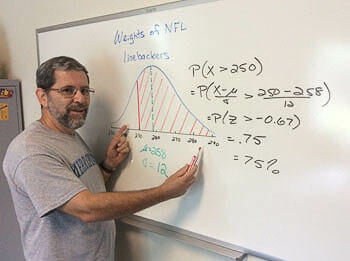 Why didn’t the Seattle Seahawks let running back Marshawn Lynch carry the ball from the 1-yard line against the New England Patriots in the Super Bowl?

This is the second year that Bradley, co-chair of the Math Department, will use fantasy football to teach statistics.

“The idea of the course is to learn statistics in a familiar and enjoyable context,” he said.

Winning isn’t the goal. Fantasy football gives Bradley a common ground on which to talk to his students before or after class so he can get to know them on a personal level, but it’s also a useful learning tool. The same lessons about statistics work in other fields, such as economics, marketing, or political polling.

The idea for the course came out of Bradley’s own experience with fantasy football after a friend talked him into joining a league about three years ago.

“As the season went on I was doing more statistical analysis to strategize for my team, and I thought it would be a good course,” he said.

Last year’s class had three fantasy leagues, made up of nine two-member teams plus Bradley, playing a nine-week schedule.

While creating the teams, he tried to pair novice fantasy league players with experienced players. It worked well with teammates supporting each other on the math and athletic aspects.

Some of the statistical questions students faced outside of game situations were fun. One question asked students to determine how many linebackers weigh more than 250 pounds, using hypothetical values for the mean and standard deviation.

“It was a simple idea,” Bradley said.

Bradley was a little surprised by results of the inaugural course. There were nine women and seven football players among the 49 students and he expected the men to fare better in the league because of their personal interest and familiarity in the sport but it turned out the women out-performed the men.

“It would be accurate to say that most of the women got A’s and B’s and that as a group, the women performed better than the football players,” Bradley said.

Even getting As in statistics can’t guarantee that fantasy sports league players will be successful. There are books, magazines, newspaper stories, and television shows all trying to predict how well players will perform for fantasy leagues.

In the end, it’s still difficult to forecast a winner because the sampling of available information in a nine-week season is so small — and then there are outside factors that can affect a game, such as the human element.

Even ESPN, the self-proclaimed worldwide leader of sports, is only right about 50 percent of the time when predicting which players will score 10 or more points a week, Bradley said.

So, why did Seattle Seahawks head coach Pete Carroll call a pass instead of a running play that looked like a gimme touchdown to win the game?

The Seahawks argued afterward that the team had been successful seven of the eight times it ran a similar play during the season.

But statisticians counter that running-plays league-wide were slightly more successful from the 1-yard line.