The Reilly sisters, Emily and Hannah '21, came up short in their bid to win New England Sports Network's video production contest for the popular “NESN Next Producer” television show — but won the hearts of viewers across the region who voted the Reillys their fan favorite. 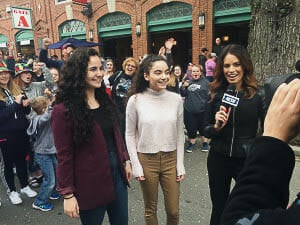 For the third season of the television show that challenges the next generation of New England college filmmakers to make short sports-themed videos, the twins decided not to do a typical sports newscast video. Instead, they made a short comedic-horror film about a grudge match of putt-putt (also known as miniature) golf.

Their video aired on the show in February immediately after a Red Sox spring training game.

“We were unique and stood out,” Emily said. “We did what we wanted to do.”

That doesn’t mean they didn’t learn from the experience and feedback they received from the judges. They want to enter the contest again next year but this time plan to film something a little more conventional.

“We would apply more of our cinematography to NESN’s style,” Hannah said.

Hannah is a communication and media major with a minor in film study and Emily is a math major. Together they will share leadership responsibilities for Merrimack’s Film Club as president and vice president, respectively, for 2018-19. They are both members of the honors program and coordinate the program’s video presence.

Red Sox Chairman Tom Werner and Brad Falchuk, who are both Hollywood television producers with mega-hit shows to their credit, judged 12 entries. Then each of the three finalists made a 60-second Red Sox vignette for further judging. The eventual winner received $20,000 and an internship at NESN for her film telling the story of a DACA dreamer who plays college football.

While Werner and Falchuk judged the cinematographic value of the videos, voting was opened to the public online to determine the populist favorite with a $1,000 prize.

The contestants were in charge of promoting their own videos so the Reillys went to work letting people know about their video. They interviewed with their hometown newspaper, got their high school TV station to make announcements, and their mother spread the word on Facebook.

It got to the point that strangers approached them in the supermarket complimenting them on their film.

“We thought it was incredibly amazing because when you ask people to vote for you, you don’t know if they are actually voting,” Hannah said.