School's out for the summer, but Merrimack College has students and recent graduates at two national competitions this week: the sixth annual NASA Robotic Mining Competition at Kennedy Space Center in Florida and the National Student Steel Bridge Competition at the University of Missouri-Kansas City. 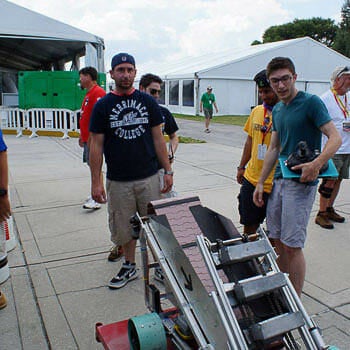 The robotics team’s competition is scheduled to live-stream at http://www.ustream.tv/channel/nasa-dlinfo2 May 22 at 9:00 a.m. The competition runs from May 18 to 22.

The team must guide its robot though a Mars-like terrain to gather 22 pounds of regolith within 10 minutes. Regolith is material such as dust, soil and broken rock that covers solid rock on Earth and its moon, Mars, asteroids, and other planets and moons.

The competition has real exploratory value, according to NASA; it is conceivable technology developed in the competition can be used to mine regolith on Mars as early as the 2030s.

The steel bridge competition, sponsored by the American Institute of Steel Construction and the American Society of Civil Engineers, runs from May 22-23.

The steel bridge team earned a spot in the nationals during the regional competition hosted on Merrimack’s campus April 10 to 11.

“It’s not easy to organize one of these events,” said Veletzos. “It was quite a feat to be able to do that and build a bridge to meet all the requirements that did well.”

The bridge the team is using to compete in Kansas City is the same one used in the regional competition, but has been painted white through the support of an alumnus.

“I am incredibly impressed with out team,” Veletzos said. “They have done such a phenomenal job with all that has happened this year and hosting the regional this year it is incredible for them to make it to national.”