Merrimack alum gets a grip on marketing his invention

Merrimack College alum Robert LaLonde is scoring big with his new hockey stick grip — a product he invented during his professional hockey years and now sells to pro and amateur players. 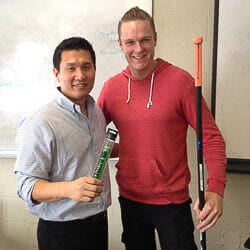 He skated for the Warriors, then played professional hockey for several years. He always enjoyed customizing his equipment, and hit on the idea of using rubber grips at the ends of hockey sticks. It seemed an obvious choice to replace the tape hockey players typically use to improve grip on their sticks. The tape wears off and the glue makes a mess when it gets wet, he said.

“I was the guy with a grand idea but didn’t know how to pull it together,” LaLonde said.

He decided to wait until after his playing career to pursue production of his grip, as he worked as a sales representative for a photocopying company in New York City.

LaLonde wasn’t a business major at Merrimack so he didn’t have business or marketing plans, or even any idea how to start a company.

While playing for a team in Pennsylvania he met with a manufacturer to pitch a business proposal in 2008, but then his would-be partner quickly dropped off the radar. Anxious that his idea could be stolen, LaLonde started the process of patenting his idea.

“That turned out to be a nightmare as well,” he said.

In hindsight, it’s better to get a patent after creating a prototype, he said; when the patent comes first, any change in the prototype forces changes in the patent.

His patent attorney cost about $20,000 alone, he told students.

LaLonde had his original concept designed on auto-CAD in New York. He wanted to manufacture his grip domestically so he could use the “Made in the USA” tag, but it was too expensive and most U.S. manufacturers wanted to use a synthetic material instead of rubber.

He connected with his childhood friend Kevin Lonergan, who helped him source manufacturers in China, and the two became business partners in Buttendz. LaLonde also found Chinese manufacturers were more aggressive in trying to win his business than American companies.

He considered production costs, evaluated the limited number of competitors in the market, then set his wholesale and retail prices.

Marketing efforts have included a trade show in Germany, where LaLonde and his partner made international business contacts and secured a European distributor.

“It was super worth it because of the exposure we got,” LaLonde said. “All these businessmen come there to find new products to sell.”

He was also planning to attend the Let’s Play Hockey Expo in St. Paul, Minn. in March to find more contacts.

LaLonde is working diligently with product placement in the National Hockey League and minor leagues such as the AHL and ECHL, college-level hockey divisions, and youth players. He also makes cold calls to retailers; works tournaments in the United States and Canada, and uses social media such as Instagram, to help market his grip.

Offering giveaways on social media gave the young company a spike in followers.  The next marketing plan is to pursue customer endorsements and referral programs, he said.

The grip can be used for other sports that use sticks such as lacrosse. Ahn’s students Trevor Gallagher ’16, of Simsbury, Conn. and Tucker Schwarz ’17, of Tallahassee, Fla. are on Merrimack’s lacrosse team and said they like the idea of the grip.

The rubber grip would replace the butt end of the stick, which often falls or breaks off when the tape wears out, Gallagher said. Sticks can’t be used in competition when the end falls off.

“I learned a lot about the promotional aspect,” Schwarz said.