Merrimack College President Christopher E. Hopey, Ph.D., recognized five faculty members who have been granted promotion or tenure at the recent Faculty Emeritus Reception, which was attended by many current faculty members and the college senior leadership team. 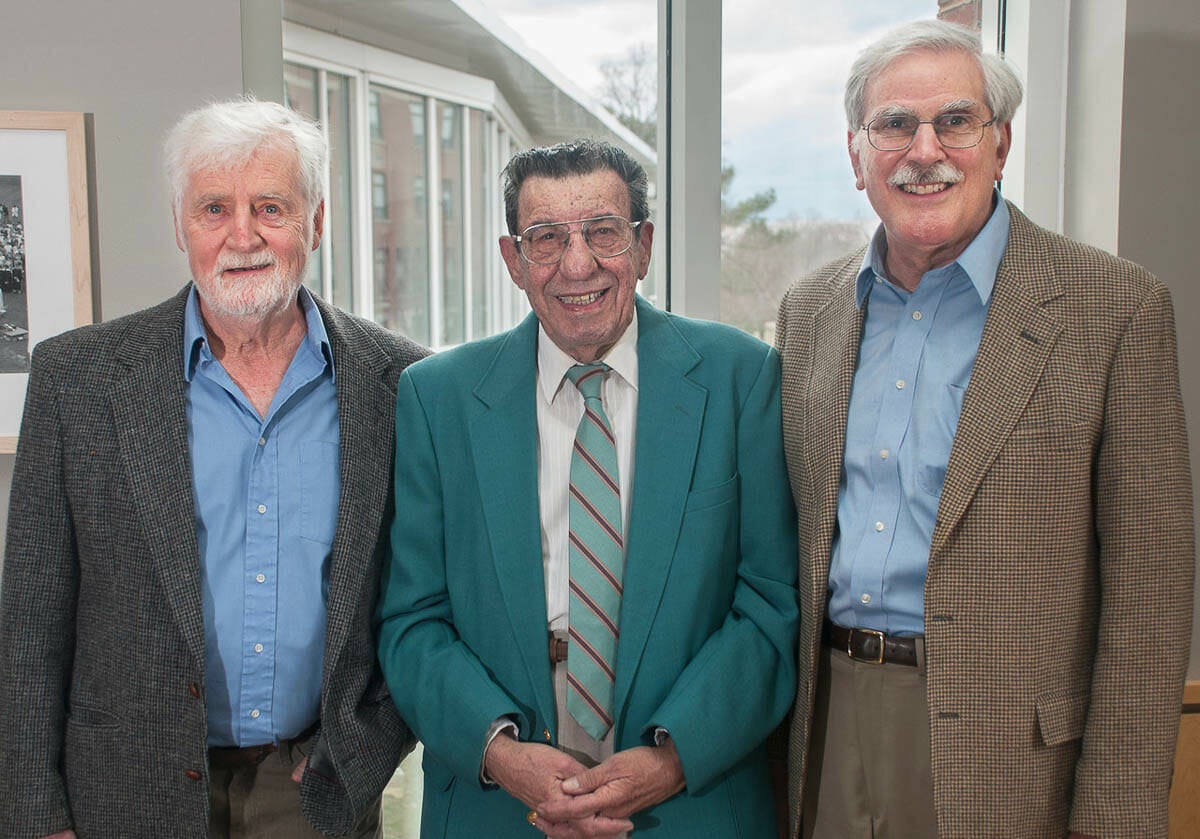 Christina Hardway, Ph.D., psychology, was promoted to associate professor with tenure. She began teaching at Merrimack in 2007. Hardway received her Ph.D. from University of Michigan. She was a post-doctoral fellow at Harvard. Hardway’s research focuses on helping individuals overcome anxiety or behavioral inhibitions to be production members of society.

Mark Veletzos, Ph.D., civil engineering, was promoted to associate professor with tenure. Veletzos came to Merrimack in 2008. He earned his Ph.D. at University of California – San Diego. He worked for more than 19 years as a licensed civil engineer in California, specializing in bridge engineering. Veletzos is currently working on national guidelines for the assessment of highway structures in emergency situations for the National Academy of Sciences.

Kerry Johnson, Ph.D., English, was promoted to full professor. An English professor at Merrimack since 1996, Johnson is the former president of Faculty Senate, and is presently serving her last year as associate dean of the School of Liberal Arts. Her Ph.D. was earned at the University of Iowa. Johnson is currently coordinating the Interdisciplinary Studies Group and chairing the Merrimack College Speakers Series. Most recently, Johnson co-edited “Rhys Matters: New Critical Perspectives,” a collection of essays on Caribbean modernist writer Jean Rhys, published by Palgrave Macmillan in 2013.

Russell Mayer, Ph.D., political science, was promoted to full professor. He holds a Ph.D. from University of Michigan, followed by a fellowship at Harvard University. He started teaching at Merrimack in 1997. He served as Faculty Senate president, chair of the Institutional Review Board, and associate dean of the School of Liberal Arts, as well as advisor to the Political Science Honor Society and as department chair. Mayer’s book, “Drawing Dead: The Government Takedown of the Internet Gambling Industry,” was published by Lexington Books in 2014. Currently the vice president for planning, institutional research and assessment, Mayer was recently named an ACE Fellow.

Paul Vatalaro, Ph.D., English, was promoted to full professor. He was tenured in 1996, having taught at Merrimack College since 1991. He teaches courses that range from horror fiction to poetry and has served as department chair and on various school and college committees. Vatalaro received his Ph.D. from the State University of New York at Binghamton.

Peter Ford, Ph.D., professor emeritus, history; Stephen Leone, Ph.D., chemistry, and Curtis Martin, Ph.D., political science, were present and recognized by President Hopey during the reception. A special recognition went out to Dr. Martin, who retired last year with emeritus status, but was unable to attend last year’s ceremony. Dr. Martin began teaching at Merrimack College in 1974. He was named the Roddy Outstanding Teacher of the Year in 2007. Martin was a mentor to numerous students and served as faculty advisor to the Model United Nations Program for 30 years. He was also a frequent contributor to the Harvard Case Study Series in International Relations.