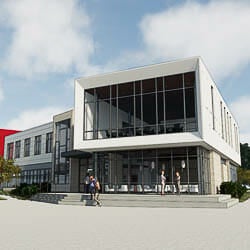 The Dr. Alfred L. Arcidi Center, announced in October, will serve future generations of Merrimack warriors and alumni with a striking gateway to the campus.

Members of the Merrimack community attended a luncheon event in large numbers to honor Dr. Arcidi as well as to take first looks at the design of the new center.

“The purpose of this initiative is two-fold – as a welcome center, it offers a portal to all those who come to Merrimack seeking further knowledge and a path to success,” said Christopher E. Hopey, Ph.D., president of Merrimack College. “As the O’Brien Center for Career Development, it is a portal for our students to the wider world, preparing them for their path to success after college.”

The approximately 16,000 square-foot Dr. Alfred L. Arcidi Center will be located at the edge of campus off of the Elm Street entrance and will house the college’s Welcome Center, the O’Brien Center for Career Development – in addition to several conference and meeting spaces throughout the building.

As Dr. Arcidi attended the ceremony, his sons Philip Arcidi and Alfred Arcidi Jr. said the family has a long history with the college and is pleased to be a part of its growth.

“It is an honor to have my father’s name on the gateway building to this campus,” Philip Arcidi said to the crowd.

Dr. Arcidi’s gift celebrates his own and his family’s legacy at Merrimack. A 1953 graduate of Merrimack who went on to found one of the region’s most successful health-care companies in the state of Massachusetts. He is the father of three graduates — members of the board of trustees Alfred ’84, P’06, ’18, M’18 and Philip ’81, P’15 and their brother Michael ’85 — and grandfather of four more Warriors. Dr. Arcidi was presented an honorary doctorate by his alma mater in 2012.

“I want to thank Dr. Arcidi as well his sons; Alfred and Phil, both board members of the college, and his son Michael, for their leadership and support of the college,” said Hopey. “This is a significant gift for the institution and I am grateful for their generosity and trust in the college.”

Merrimack’s campus has transformed significantly over the last five years and the development of North Campus is the college’s most recent building initiative in approximately two decades. The complex is anchored by Crowe Hall, new home to the Girard School of Business which opened this fall, and the North Residential Village, two modern residence halls that opened in fall 2015 which is home to the Honors Program and the Sanctuary coffeehouse.

In addition to the expansion of North Campus, over the past eight years the college has embarked on 940,000 square feet of building and space enhancement projects that include:

“We have built hundreds of thousands of square feet for academics, student life and recreation,” said Hopey. “Merrimack constantly looks forward while remaining firmly rooted in our culture, history and traditions.”