Merrimack College welcomed in the Christmas season with its annual Light and Hope celebration amid a picturesque blanket of fresh snow covering campus Tuesday Dec. 3, 2019. 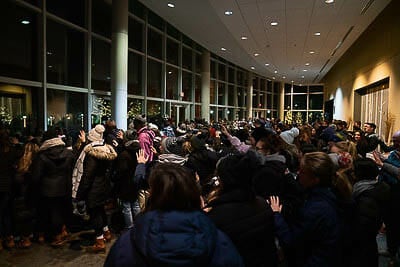 The festive celebration included singing, children visiting Santa and Mrs. Claus, ice skating and, of course, the lighting of the campus Christmas tree outside the Rogers Center for the Arts’ atrium.

“Christmas, of course, is the welcoming of the light of the world in the midst of darkness which is why we have Christmas lights,” said the Rev. Ray Dlugos, O.S.A. The darkness includes the burdens of life.

The atrium was crowded with students, faculty, staff, and their families when President Christopher E. Hopey gathered the children to lead in a countdown to lighting the outdoor tree shortly after sunset.

“This is the first year we’ve had two feet of snow for the Christmas tree lighting,” Hopey said. “So we’re very excited.”

After the tree lighting, the J. Thom Lawler Rink was opened for public skating and a buffet meal served in the Hall of Fame Lobby where the College jazz band performed under Director of Bands and Jazz Ensemble Paul Geresy and Mr. and Mrs. Claus greeted children. Outside the lobby, festivities continued with carolers dressed in Charles Dickens-era clothing performed.

“I think coming together as a community is a great opportunity to share the time with with everybody,” Zukowski said.

Associate Director of Residence Life Jonathan Bragg brought his 10-year-old son Owen to the celebration for the fifth straight year. Owen said the food and singing were his favorite parts.

There were no official counts on how many people attended but Campus Ministry handed out 500 Merrimack College stocking caps as part of the celebration.

The concert choir performed holiday favorites that include “Christmas Time is Here” written for the 1965 TV special “A Charlie Brown Christmas,” the “Christmas Canon” by the Tran-Siberian Orchestra written for its 1998 album “The Christmas Attic,” and the Ukrainian Christmas song “Carol of the Bells.”