Following a years-long review process, the College will host a chapter of the prestigious Tau Beta Pi society, along with some of the leading engineering schools in the country. 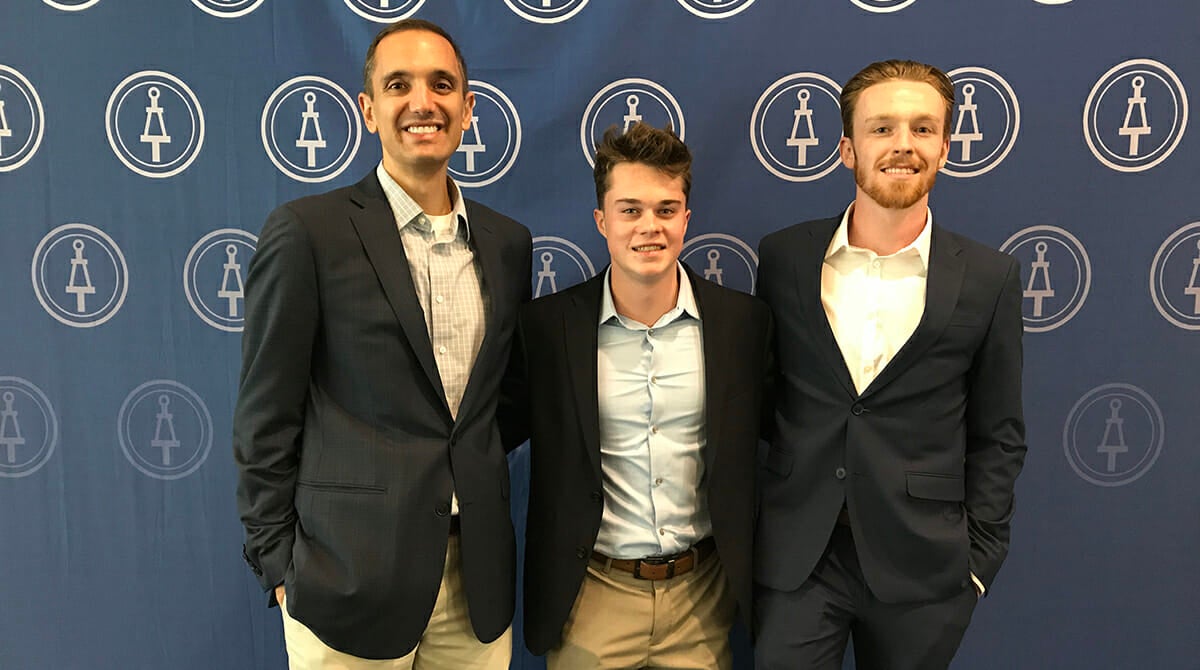 “It’s internationally viewed as the most prestigious honor society in engineering,” said Jim Kaklamanos, associate professor of civil engineering and chief faculty advisor of the Merrimack College Engineering Honor Society (MCEHS). “It’s basically the engineering equivalent of Phi Beta Kappa in the liberal arts. Having Merrimack associated with this organization really elevates not only the engineering programs but the whole College.”

The appointment was confirmed at the 2022 Tau Beta Pi convention in Knoxville, Tennessee this past September. At the convention, Kaklamanos, MCEHS Student President John Liddy ’23, and Student Vice President Brandon L’Heureux ’23 petitioned in front of hundreds of attendees on why TBP belonged at Merrimack.

“It was definitely a lot different than anything I’ve done before,” said Liddy, a senior studying civil engineering. “It was honestly really exciting because I was very confident in what we had to present. It was less nervous for me — it was more exciting. It was still a really, really good experience being able to have that public speaking ability in front of a couple of hundred people.”

And rock it they did. Merrimack will now serve as TBP’s 10th Massachusetts chapter. Liddy and L’Heureux were the first two members to be initiated at the convention.

L’Heureux said he’s proud to see his and Merrimack’s hard work pay off.

“It feels great to have this achievement and to do something like this for the school,” he continued.

Before either Liddy or L’Heureux enrolled in Merrimack, engineering students and faculty had already set the wheels in motion to join TBP. Merrimack first established its engineering honor society in 2017 after a period of substantial growth within the School of Science and Engineering. Just five years prior, the school added an undergraduate program for mechanical engineering and eventually grew its faculty from five to 15 full-time members.

“From the get-go, the student officers and the (faculty) team were in contact with Tau Beta Pi with the intention of applying for affiliation,” explained Kaklamanos. “To become affiliated with Tau Beta Pi, you have to essentially operate as if you’re a chapter for at least two years.”

The preliminary petition was sent to TBP headquarters in 2019. TBP initially scheduled an on-site inspection of the engineering department for spring 2020. Unfortunately, the COVID-19 pandemic hit and delayed the inspection for two years. It was finally completed in April of this year.

The inspection consisted of an overview of the school’s curriculum, facilities and honor society leadership – as Liddy put it, “The main goal of it was basically just (to show) that we’re actually who we say we are on paper.”

After the inspection was completed, TBP suggested Merrimack implement a character interview with student officers for all honor society candidates.

“I think it’s really a good opportunity to get to know some of the classmates I might not know as well,” Liddy said of the new student-led interviews, “especially since we’re really discipline driven. We know a lot of the students in our classes since we’re such a small tight-knit community, but as our school keeps growing it will kind of help evolve that growth and help get students to know each other better.

Now back from Knoxville, Liddy, L’Heureux, and Kaklamanos are organizing the chapter’s installation and first initiation ceremonies. They are working alongside fellow student officers Sean Janerico ’23 and Hannah Goldthwait ’23 and faculty advisors Profs. Paula Bordogna, Cyndy Carlson, and Franco Capaldi on the events scheduled for March 25.

Initiation will be open to any of the 76 former Merrimack Engineering Honor Society alumni, as well as all current student members of the MCEHS.

“Everybody that’s ever been in the Merrimack engineering honor society will become Tau Bates,” explained L’Heureux, “which is pretty cool.”

In addition, the student officers, are planning events with other engineering student organizations to increase the new TBP chapter’s visibility.