Merrimack College has some of the best women skaters in the country and they aren't all on the hockey team. Five students are members of the independent national-champion Haydenettes synchronized skating team. 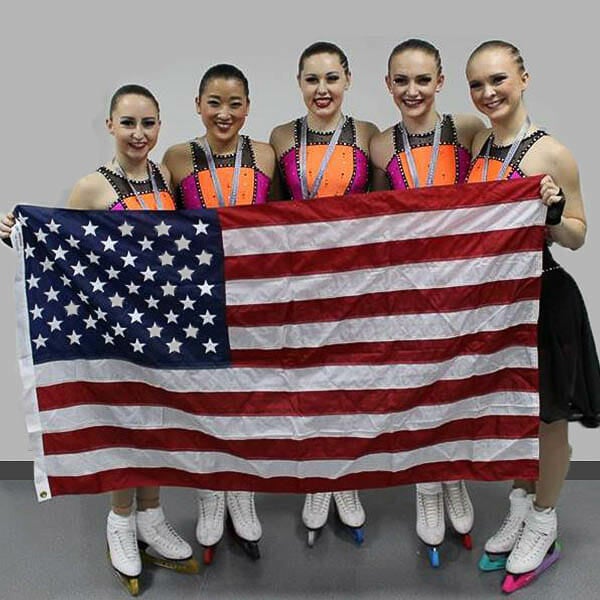 The Haydenettes are the senior level club for the Hayden Synchronized Skating Team and recently won the 2016 U.S. National Senior division championship in Kalamazoo, Mich. It’s the 24th time the team has won the nationals.

With the nationals complete, the club is preparing for the world championship competition in Bucharest, Romania April 8-10.

The Haydenettes also took second place in the short program for the inaugural Shanghai Trophy held in China recently.

Being on the team requires incredible dedication to balance practice, travel, school, and family but it’s worth it, Neff said.

“When you are on the ice it’s a completely different feeling than anything else,” she said. “It’s indescribable If you’re having a bad day you get on the ice and everything goes away.”

The team is made up of 18- to 26-year-olds from across the country.

Synchronized skating is similar to the figure skating with which most people are familiar but instead of one or two people on the ice there are 16 skaters from the 20-member team, Tomich said.

It travels internationally three or four times a year, said Gail H. Mayer, who’s managed the team for 20 years. In addition to local competitions the team has also traveled to such places as Barcelona, Spain and Gothenburg, Sweden, Kalamazoo, Mich. and Shanghai, China this school year.

“It’s a dynamic sport. It has a lot of speed to it and it has a lot of risk,” Mayer said. “They take risks that are hard to execute unless they do them well.”

The team practices five days a week and skaters practice on their own the other two days.

The long season ends after the world championship but training for the next season starts May 1.

“It’s pretty much a never-ending season,” Neff said. “You get two-, two-and-a-half weeks off then it’s back in the game.”

Children grow up dreaming of being on the Haydenettes.

Tomich, 20, of Caldwell, N.J., is a human development and elementary education major. Her mother is a figure skating coach and her father was a hockey player for William Paterson University so skating came naturally to her and she hit the ice when she was just a toddler. Tomich said she grew up wanting to skate for the internationally renowned Haydenettes so when it came time to pick a college she chose Merrimack to be close to the team’s practice facilities.

“It turned out to be a great pairing – skating and school,” Tomich said.

Neff, 21, of Birmingham, Mich., is a human development major with a concentration in school and society. She’s been figure skating 17 years, including 14 as a synchronized skater. Neff started her college career in Michigan performing on a synchronized skating club there.

“I actually transferred to Merrimack and moved to Massachusetts for skating,” she said.

Stodola, a business and marketing major, has been skating for 10 years, including nine in synchronized skating. She tried out for the team two years ago while still a high schooler in Appleton, WI. and won a spot on the junior team, called the Lexettes. She moved to Lexington, Mass. for her senior year of high school before being promoted to the senior team and enrolling at Merrimack this year.

“It’s just a really neat experience,” Stodola said. “I’ve been dreaming of this team my whole life so to be able to reach that goal is incredible.”

Gottfried, who turned 19 years old April 1, is a psychology major who’s been skating since she was about 4 years old and has been performing synchronized skating almost from the beginning.

“I do it because I love the feeling of having 15 other girls by your side, helping you through everything,” Gottfried said. “It’s a rush you don’t get when you skate by yourself.”

Balancing school, family, friends, and skating takes what Gottfried called smashing. When she wants to hangout with friends she makes it a study party so she can smash them together.

“It actually takes a lot of multi-tasking,” she said.

Kynoch is a human development major who made the Haydenettes as a senior in high school, so she commuted to practices in Lexington, Mass. from Easton, Conn. before enrolling in Merrimack. She’s already been a synchronized skater about 15 years and plans to perform another year after graduation.

The team has won the national title each of the five times Kynoch has been a member but has been less fortunate in the world championships. It was a third place finisher her first two years and then fell to seventh the last two years.

Kynoch has high expectations this year after earning silver medals in Sweden and China.

“We are just really excited as a team and I’m really excited to go out there and get on the podium and be successful,” she said. “This year we’ve proven we are capable of that.”

The club has been coached by Saga Krantz , of Finland, for 12 years.