Merrimack College Welcomes Six Members to Board of Trustees

An accomplished group of six leaders representing a myriad of industries will bring their expertise and counsel to the Merrimack College community as the newest members of the Board of Trustees. 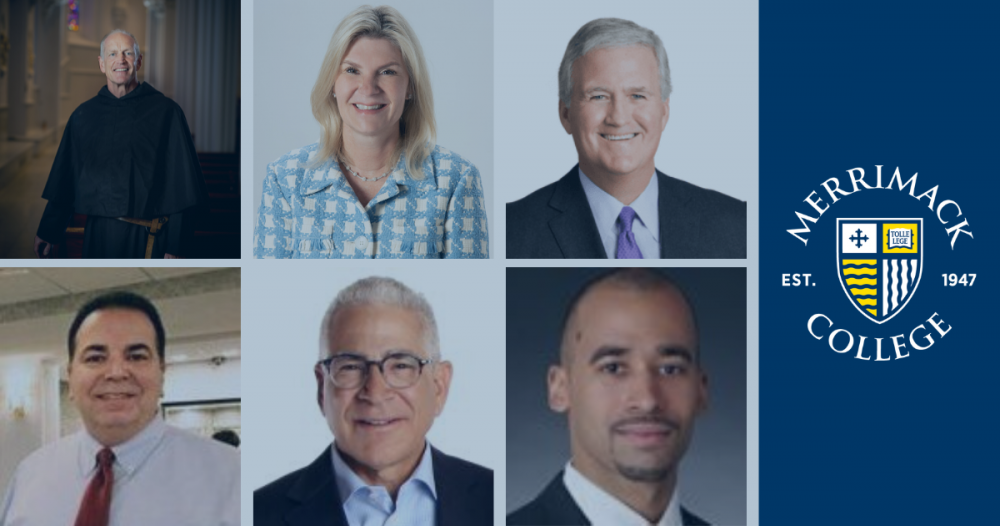 “I am excited to welcome these six outstanding individuals to the Board and I look forward to working closely with them to bring Merrimack to the top echelon of higher education,” said Merrimack President Christopher E. Hopey, Ph.D. “While they will each bring their own ideas and experiences to the Board, these individuals share common characteristics: a devotion to Merrimack and a desire to see the College and our students succeed.”

“The breadth and depth of the Board’s work will be greatly enhanced by the addition of these individuals,” said Trustee Chairman Jack Boyce ’81. “They are joining the Board at an exciting and critical time for Merrimack College. I am thrilled to have their expertise as we work together to fulfill Merrimack’s mission.”

About the New Members

He was a Merrimack College Leadership Council invitee in 2014 and served on the President’s Advisory Board in 2011. The Arcidis are one of the most renowned and generous families in Merrimack’s history. The family’s support over the years has benefited countless Merrimack students, and the Arcidi name graces the College’s welcome center, a gateway for all future Warriors.

Arcidi received his bachelor’s degree in business administration from Merrimack College in 1985.

Carpenter-Dennis is vice president and assistant general counsel for the NBA, where he has worked for the past six years. Carpenter-Dennis has risen through the ranks in the NBA’s front office, first working as an associate counsel. He also serves as secretary of the NBA Foundation, which drives economic empowerment for Black communities through employment and career advancement, seeking to increase access and support for high school, college-aged and career-ready men and women.

Prior to working at the NBA, Carpenter-Dennis was an associate at Cleary Gottlieb Steen & Hamilton, LLP.

He received his bachelor’s degree in economics-philosophy from Columbia University in 2006, and his juris doctorate from Harvard Law School in 2010.

Lynne Chase has excelled in the property management and real estate industry for 30 years, advancing within the Winn organization to her current position as chief accounting officer for WinnResidential, WinnResidential Military Housing Services and WinnDevelopment, which operates in 23 states and the District of Columbia. In her role, she is responsible for directing the accounting operations for the 103,000 apartment homes in the company’s owned and managed portfolio, including more than 41,000 homes managed under the Military Housing Privatization Initiative (MHPI).

As chief accounting officer, she is responsible for all aspects of accounting, treasury, budgeting, financial reporting and internal controls for company affiliates – WinnResidential, WinnResidential Military Housing Services and WinnDevelopment as well as management operations software and support. She leads a team of 130 team members and has assisted WinnCompanies’ growth to become the nation’s sixth largest firm in residential property management. This growth spans from market-rate, affordable, senior, and mixed-income housing along with condominiums and homes for America’s military families.

As an alumna, Chase has remained very active in the Merrimack community. She has served on the College Leadership Council since August 2019, was on the Business Advisory Board from 2001 to 2005 and was a Warriors at Work mentor in 2019.

She and her husband William established a scholarship for the Pioneer Scholars Program, as well as generously contributing to Merrimack student scholarships, the Merrimack Fund and the School of Liberal Arts.

Chase received her bachelor’s degree in business administration from Merrimack College in 1990. Her son Harrison Chase ’23 is currently enrolled at Merrimack in the School of Liberal Arts.

For two decades, Duane worked in a variety of executive roles in PVH Corp, one of the largest global apparel companies in the world. He ultimately rose to vice chairman, as well as CEO of Heritage Brands. He was responsible for managing North American customer account relationships, overseeing the strategic direction of Heritage Brands sportswear and was involved with broader strategic corporate initiatives.

He previously worked for Guess, Nautica, Hugo Boss and Burberry. Duane has served as a member of the board of governors for the YMA Fashion Scholarship Fund, which sponsors over $1.5 million in scholarships annually for fashion, arts and business; and on the board of trustees of Gives Kids The World, a non-profit organization that provides children with life-threatening illnesses and their families with complimentary visits to central Florida attractions.

Duane was recognized as a 2014 community honoree at the Wholeness of Life Gala, a national father of the year in 2010 by the National Father’s Day Committee and received the YMA leadership award for continued work with college and university students to grant money for studying fashion.

As a former lacrosse player and hockey player at Merrimack College, Duane has generously supported the Athletic Department over the years, including the Warrior Fund, the Volpe Renovation Project and the multipurpose stadium that bears the Duane name. He has also supported the President Christopher E. Hopey and Cheryl Lucas Endowed Pioneer Scholarship.

Duane received his bachelor’s degree in finance and marketing from Merrimack College in 1980 and a MBA from Columbia University in 2000. He also received an honorary doctorate degree from Merrimack in 2016.

Franco has practiced law for 30 years and is currently the principal attorney at Franco & Associates, a real estate and litigation law firm. His primary areas of practice are commercial and residential real estate, business law, estate planning and probate, with licenses to practice law in Connecticut, Massachusetts, Vermont and New Hampshire.

An active Merrimack College alumnus, Franco serves on the College Leadership Council and Reunion Committee, and previously served on the Business Advisory Board New York and the President’s Advisory Board.

With his wife Mary, Franco has contributed to Building for Good capital projects, the Merrimack Fund, the President Christopher E. Hopey and Cheryl Lucas Endowed Pioneer Scholarship and the Pioneer Scholars Program.

As a student at Merrimack, Franco played on the lacrosse team and was a member of Beta Sigma Epsilon, the Student Government Association, the Ski and Snowboard Club and Model United Nations.

Fr. Hagan is the newly installed Prior Provincial of The Province of Saint Thomas of Villanova. In this role, he oversees Augustinian communities and apostolates on the east coast of the United States as well as international missions in Peru and Japan.

He serves as department chaplain for athletics and previously served as senior associate athletic director at Villanova University overseeing all aspects of student-athlete welfare, including the sports medicine and strength and conditioning departments. Fr. Hagan also serves as the team chaplain for the Villanova football and men’s basketball programs. He arrived at Villanova in 2003 as the assistant athletic director for compliance and was promoted to his current position in July 2004. He was ordained to the priesthood in September 2003.

He received his bachelor’s degree in arts from Villanova in 1987 and his juris doctorate from Widener University School of Law in 1990.