With perfect weather to complete a perfect day, 520 excited Merrimack College graduates and their guests laughed and learned from actor Charlie Day '98, who stars in the FXX series, “It's Always Sunny in Philadelphia.” 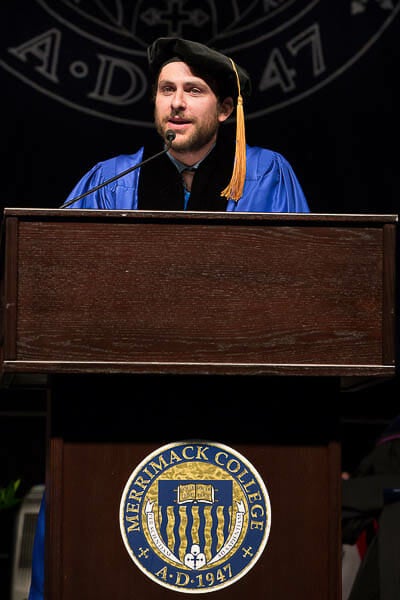 Day, who holds a bachelor’s in fine arts, delighted a packed Lawler Arena on Sunday, May 18, with his humor, but ended with a serious message to the graduates. He told them to take risks and not fear failure.

Day was awarded an honorary doctorate in performing arts by President Christopher E. Hopey at the college’s 64th commencement exercises.

The ceremony culminated a week of events at Merrimack that included commencement for 175 graduate students on May 16, a reception for Merrimack College legacy families, and a schedule of senior send-off events.

Philanthropic entrepreneur Rachael Chong delivered the keynote address at the graduate exercises on May 16. Chong is founder and CEO of Catchafire, the nation’s leading online pro bono network that connects talent and purpose. She urged graduates to look for ways to improve the world.

Hopey bestowed an honorary doctorate in humanities on Chong.

Jade Scarpa, who received a master of education in the School of Education and Social Policy, was the student speaker.

Seniors and their families attended a Baccalaureate Mass on Saturday celebrated by the Rev. Raymond Dlugos, O.S.A., Merrimack’s vice president for mission and student affairs, in the Collegiate Church of Christ the Teacher.

In addition to Day, honorary doctorates were conferred upon Patrick B. Maraghy ’68, the Very Rev. Anthony “Mickey” Genovese, O.S.A., and Timothy R. Murphy ’88.