Nine members of the Merrimack College community partook of the sacraments of the Catholic Church — baptism, First Holy Communion, confirmation, or all three — in recent ceremonies in the Collegiate Church of Christ the Teacher. 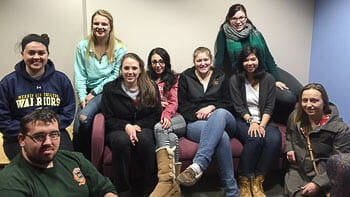 The Rev. Keith Hollis, O.S.A., administered the sacraments for three students April 12, and Bishop Robert F. Hennessey, an auxiliary bishop of the Boston Archdiocese and vicar general of the Merrimack Valley region, administered sacraments for six members of the college community, including an alumnus, and about 70 area residents on April 14.

Offering the sacraments at Collegiate Church makes Merrimack more open to the community around it, campus minister Cara Annese said.

“I think it helps us have exposure to the wider Merrimack region and see that other people have gone through the same process,” she said. “It opens the Merrimack College community to show the positive side of what Merrimack students are doing.”

Ung, an environmental studies and sustainability major with biology and communications minors, went to Lowell Catholic High School but wasn’t religious growing up.

Then she found solace, during a period of personal turmoil and sadness, through the rich Catholic faith toward the end of her high school career and start of college.

“I wasn’t raised Catholic and my parents didn’t push religion on me,” she said. But “at the end of high school a couple of people in my family passed away and last year was really tough being away from home and being in college, making friends and adjusting. When I went back home in December I experienced some personal issues, so ultimately I decided to become Catholic and go through this process.”

It wasn’t always easy finding the energy to go to the required classes, especially after coming back to school after a vacation break, but Ung was goal-oriented and persevered.

Annese challenged Ung to learn more and explore the religion on a deeper level. During each class she learned something new and immersed herself in learning about God, Catholicism, and the community.

“It’s more than faith and belief,” Ung said. “It’s a full experience, I don’t know how to describe it — being able to meet other people through this process had been incredible because I learned so much from them.”

“I just think I was meant to do this and this was the perfect time to do it, and I wouldn’t want it any other way,” she said.

MacArthur ’18, of Rockport, Mass., grew up Catholic but stopped practicing after receiving first communion. She got busy with other aspects of her life during high school and study toward confirmation.

“Because Merrimack offered this, I thought it was a good opportunity to just do it and I really enjoyed it,” MacArthur said.

It was a little difficult getting used to the rhythm and routine of Mass again, but attending with her college peers helped.

“I really like going to Mass on campus because you’re with other students,” she said. “It’s like a different atmosphere; it’s not relaxed, but it’s comforting to know you’re going to school with these people and they are there because they have the same beliefs as you.”

The classes leading to the sacraments also helped students bond in an atmosphere outside the classroom, she said.

Ung had an epiphany toward the end of her classes. Throughout the classes she saw herself becoming a Catholic rather than a disciple of God; then, like a thunderbolt, she reached a new level of faith.

“But that class I realized I have to live with God’s presence in mind and make him proud,” she said. “It was a lot to handle but I’m really happy I am part of His life and He’s part of mine.”