Dean Dan Butin of Merrimack's School of Education and Social Policy has been named one of the top academic influencers in the education world by in the online Edu-Scholar Public Influence Rankings set to be released Jan. 7. 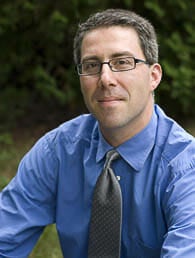 “Our goal as academics should be to enhance the greater common good, and as such we of course need to be better at contributing to the public discussions and debates around the roles of schools in our society,” Butin said. “Hess’ list highlights this, and I am honored to be a part of it.”

Scholars from than 50 universities and colleges were listed in the ranking. Butin was ranked 112 on the list dominated by Stanford and Harvard universities.

Butin is a leader in the field of education, putting his research work into practice, including community engagement, said Provost Carol Glod. He has partnered with community schools and agencies, developed leadership think tanks, as well as a national fellowship program for teacher education and higher education administrators.

“He is a visionary who continues to create a transformative experience, blending education and practice, linking theory and practice and classroom to community,” Glod said.

Hess, who is a blogger for Education Week, used eight metrics to calculate how academics moved ideas from professional journals to the national conversation on education.

“One small way to encourage academics to step into the fray and revisit academic norms is, I think, by doing more to recognize and value those scholars who engage in public discourse,” Hess said.

Last year, Butin was named to the top 100 in the Edu-Scholar Public Presence Rankings for his body of academic work, including his writing and its impact on public discussion regarding education.